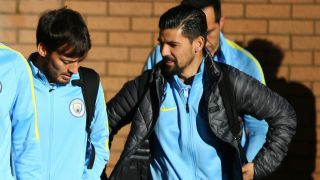 Manchester City forward Nolito spoke of his frustration at his lack of playing time and slammed the English weather as he prepares to leave the club.

After starting only nine Premier League matches under Pep Guardiola last season, the Spain international is expected to switch back to LaLiga on loan, with Sevilla, Atletico Madrid, Real Betis and his former club Celta Vigo all linked with a move.

Discussing his situation, Nolito revealed he has struggled to learn English during his one year at the Etihad Stadium and claimed his daughter's face was a different colour now than it was when he arrived due to the cold conditions in the country.

"My daughter's face has changed colour – it looks like she's been living in a cave."

Nolito added: ""I am under the contract, so the club will decide, but I want to leave.

"I don't think City are counting on me much considering the minutes I've played since January.

"I haven't played in six months. I'm not angry with [Pep] Guardiola and he doesn't have to have reasons to be angry with me, either. It simply hasn't gone well.

"Now I will do everything possible to make Spain's World Cup squad."

Nolito was pictured with new Sevilla sporting director Oscar Arias during a holiday to Spain, but the 30-year-old claims it was a chance meeting while shopping for new clothes.

"I was just casually shopping for clothes for my wife in Seville," he said.

"I went to get a coffee and bumped into Sevilla's director of football coincidentally. I also saw the Sevilla president later on, but thank goodness no one took a photograph then."