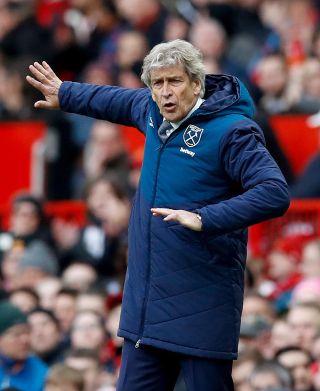 Manuel Pellegrini wants his West Ham team to show their ambition to compete with the top six when they take on Manchester United on Sunday.

The Hammers went into the weekend eighth in the Premier League table but level on points with third-placed Tottenham after five matches.

In last season’s meeting at the London Stadium, West Ham ran out 3-1 winners but Pellegrini expects a tough fixture this time.

The Chilean said: “We know that we have a very strong team in front of us, now we have a good test against United and we will try to beat them.

“It’s the only way to try to arrive in the first six positions of the table, demonstrating every game that you are able to do it.”

On the possibility of finishing in the European positions, Pellegrini said: “At this moment when you have played just five games and you have eight points, you have the same points as Arsenal, as Manchester United, Tottenham, Chelsea, so we are demonstrating that.

“That’s why I think we must not start any future game thinking that ‘oh we beat Manchester United last season, now we are in a good moment’ – we must demonstrate again because football changes in two or three days.”

United have lost just once in this season’s Premier League, to Crystal Palace at home, while the Hammers have had mixed form at the London Stadium.

They lost 5-0 to Manchester City on the opening day of the season but beat Norwich 2-0 in their last home game and Pellegrini wants to build on that result.

“We are going to try from the beginning, from the first minute of the game,” he said. “They continue to be a big team, good players, with players that make a difference, so we must be very concentrated in our defending.

“Every game or every points that you don’t lose at home is better for you. You see the statistics for all the teams, the most amount of points you have are at home.

“We are doing well playing away, but we need to be a strong team playing in our stadium.”