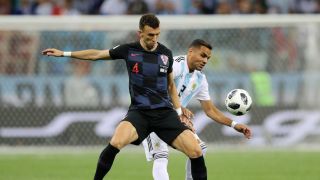 Ivan Perisic wants to replicate the "miracle" of France 98 with Croatia's current band of in-form stars.

Croatia entered their first World Cup 20 years ago and a much-celebrated team featuring the likes of Zvonimir Boban, Robert Prosinecki and Davor Suker stormed to the semi-finals before falling foul Aime Jacquet's hosts and eventual winners.

Authoritative wins over Nigeria and Argentina mean the Balkan nation are through to the knockout stages for the first time since and, driven by the midfield brilliance of Luka Modric and Ivan Rakitic, starting to dream again.

"There has been a lot of comparison between those two teams," said Inter winger Perisic.

"They did a miracle in France in 1998. I was nine years old watching those games and dreaming about being in a similar situation.

"Now we are here and we hope to catch them or come close to them. We are ready to do that."

Defender Vedran Corluka made his 100th international appearance against Argentina and, even for a player of his vast experience, the greats of the past loom large.

"They were all legends for the current players, they are idols," he said.

"In the last 20 years Croatia didn't pass the group stage so all the comparisons so far have not gone that well.

"This time we have passed the group stage and hopefully this team will come close or make the same performance."

Croatia's present vintage threatened similar exploits at Euro 2008 and Euro 2016 before running out of road in the knockout stages.

Perisic hopes the experience of those setbacks can ultimately serve them well in Russia.

"We weren't among the favourites before this tournament and we didn't deserve that anyway," he added.

"For the last 20 years we haven't been able to achieve a similar result like we did in France. We were maybe close at the Euros in 2008 in Austria but we missed a little bit of luck.

"Hopefully that will turn around at this tournament. We just need to continue doing what we did so far."