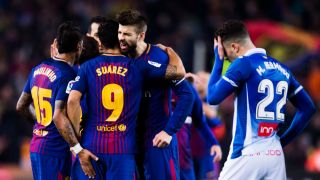 After losing the first leg 1-0 at the RCDE Stadium on January 17, Barca turned the tie around on Thursday with a 2-0 victory courtesy of goals from Luis Suarez and Lionel Messi.

And Pique could not resist a jibe at their Catalan rivals as Barca celebrated progression at Camp Nou, naming them Espanyol de Cornella – a suburb of the Barcelona metropolitan area - rather than Espanyol de Barcelona.

"It isn't that we suffered so much in this game, but Espanyol de Cornella always make it difficult for us," he said, as quoted by Marca.

"We started very well with the two goals and it is a result that pleases us."

When questioned on the new name he had given Flores' side, the Spain international added: "Yes, Espanyol de Cornella, they're from Cornella right?"