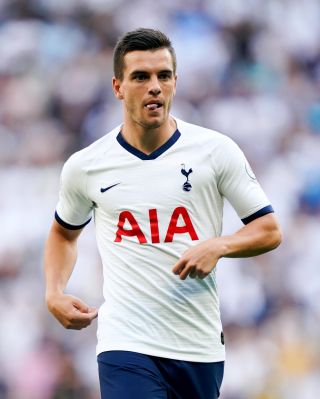 Mauricio Pochettino is disappointed Tottenham’s summer loan signing Giovani Lo Celso will be sidelined for at least the next month with a hip injury.

The midfielder suffered the issue while on international duty with Argentina, coming off during their match with Chile, and is not expected to return to training until the end of October.

Lo Celso, who joined from Real Betis last month, has only made three appearances off the bench for Spurs and will have to wait a little while longer to make his full debut.

“Always it’s a sad situation, I’m very disappointed. For Giovani, the first months here was to adapt to a new club and new football,” Pochettino said.

“Everything he was doing in a very good way. We are all so disappointed because now we need to wait for him.

Lo Celso will not be the only South American missing for Saturday’s Premier League match at home to Crystal Palace.

Tanguy Ndombele (thigh), Kyle Walker-Peters (hamstring), Eric Dier (hip) and Ryan Sessegnon (hamstring) are back in training, but will need to be assessed before Palace make the trip across London.

Pochettino revealed he spent close to an hour with his squad at Tottenham’s training ground today discussing the objectives for the next few months and the need to get back to winning games consistently.

He added: “The conversation today altogether now is the squad we are going to have until January, when the rumours will appear again and different situation.

“It was very good to talk today for nearly one hour and refocus again on our objective.

“To be clear in our minds, to think that the most important is the collective and start to put outside individual situations, all together again and try to create a dynamic and be strong and starting winning games. That’s the most important thing for us now.”

While the Premier League transfer window shut on August 8, the European window was open for another three weeks.

It meant clubs from La Liga as well as Serie A could sign the best players in England and Pochettino admitted several times he was unsure if Christian Eriksen would remain with the club.

The Denmark international only has a year left on his contract, but didn’t move on before September 2 and will be with Tottenham until the winter window opens in January.

Despite this, Pochettino said of Eriksen: “He’s happy. He was always happy. He never said he wasn’t happy here.

“Everyone of course has aims, goals, challenges. I told you before the Arsenal game he was in his right mind and that’s why I played him.

“Always he was an important player for us. In our sixth season, we’ve always appreciated him a lot.

“His qualities are there and important for the team. He’s happy and if we believe he deserves to play then he’s going to play. It’s not because he has less than one year on his contract we’re going to take a different decision. All decisions are based on performance.”