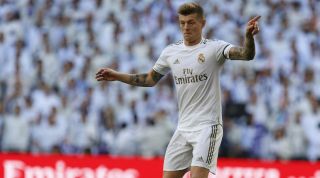 Kroos is gearing up for Real Madrid's big Champions League round of 16 first-leg against Manchester City on Wednesday night.

The German joined Los Blancos from Bayern Munich after the World Cup, during the summer of 2014.

Since then, the playmaking midfielder has been a mainstay in Real Madrid's midfield - establishing himself as one of their key players.

But things could have been very different if Kroos had signed for Manchester United instead, which he claims was almost a done deal.

The 30-year-old says it was, in fact, United's change of management that made the deal fall through.

"David Moyes had come to see me and the contract had basically been done but then Moyes was fired and Louis van Gaal came in, which complicated matters," Kroos told The Athletic.

"Louis wanted time to build his own project. I didn't hear anything from United for a while and started having doubts.

"Then the World Cup started and Carlo Ancelotti called. And that was it."

Kroos also tells of how there was another Premier League club pushing for his signature.

He says that he recieved messages from Liverpool duo Steven Gerrard and Luis Suarez, beckoning him to the Reds.

"It wasn't a straight chat-up line but they offered to tell me more about the club and so on," he added.

"The funny thing was, Suarez was about to leave to Barcelona anyway."