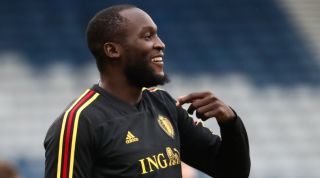 The striker completed a switch from Manchester United to Serie A for a reported £74 million this summer after a difficult campaign at Old Trafford.

And Martinez, who worked with Lukaku during his spell as Everton manager, can already see the benefits of the 26-year-old taking on a new challenge.

"This is the first time I have seen him free and happy,” he told the media ahead of Monday’s Euro 2020 qualifier against Scotland.

“Going back to many camps I have not seen Rom so focused, so happy, so refreshed by the new challenge.

"I think he is now ready to face one of the biggest footballing chapters in his career with the Inter Milan move.

“He is very driven to be as good as he can for the national team, so I have been very impressed with his happiness and the way he is looking forward to the football ahead.

"He was in a team with expectations to win at Anderlecht with Champions League participation [on top of that].

"Romelu doesn't get affected, he is one of the most driven boys you are going to see. His life is football, he just lives to score goals and to be effective for the national team and at club level."

Lukaku’s new adventure in Italy was soured by the racist abuse aimed at him by a section of Cagliari fans after the Belgian scored the winning penalty in a 2-1 win for Inter before the international break.

However, Martinez does not believe that the incident has affected his player.

"I haven't seen a difference," he said.

"It is true he was sad with the episode he had to go through but I am sure that is something that everyone in football will try to help him with and try to eradicate. There is no tolerance for that kind of behaviour."