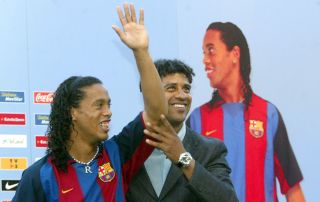 Both Barcelona and United were hot on the heels of the PSG star more than a decade ago, having seen him knock England out of the 2002 World Cup. But it was the Catalan giants who snatched the player from under United’s noses.

Reports at the time suggested Ronaldinho moved to Spain because their offer of £21 million was deemed superior to the cash-plus-player offer put forward by United.

However, in an exclusive interview with FourFourTwo, the Selecao star claims negotiations between himself and the Red Devils were close to a conclusion, and it was only when it became clear his close friend Sandro Rosell was in line to become Barcelona president that the Brazilian had a late change of heart.

Speaking in the July 2014 issue of FFT, Ronaldinho says: “It almost happened with United. It was a matter of 48 hours, but Sandro Rosell had told me way before I got the offer: 'If I become Barça president, will you come?' I said yes.

"It was only a matter of details with United when Rosell called to say he was going to win the elections there. And I had promised to him that I'd play for Barça. It was a quick negotiation. I told the English I had chosen Barca."

Rosell did not win the 2003 elections, but was named vice-president after supporting the successful candidacy of Joan Laporta. This proved enough to persuade Ronaldinho to choose the Camp Nou club over a transfer to Old Trafford.

It was a move that completely transformed the fortunes of a Barcelona side that went from not winning a trophy in four years to winning six titles in the space of three seasons, and Ronaldinho is happy he made the right decision.

“It was the right choice. Brazilians have always loved Barça. We have a history there. Off the pitch it is like nowhere else in Europe, so we are always happy playing there."

Read the full One-on-One interview with Ronaldinho in the July 2014 issue of FourFourTwo, which celebrates our 20th birthday. The magazine is guest-edited by Brazilian legend Ronaldo, features interviews with Roberto Carlos, Tostao and Zico and looks back at how football has changed during the two decades of FFT's existence. Available now in print and in a specially-designed-for-iPad version.