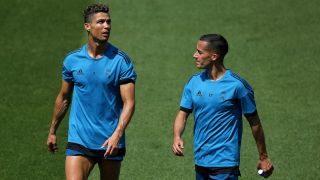 Zinedine Zidane says a fully fit Cristiano Ronaldo "lives to play these games" as Real Madrid prepare to take on Liverpool in the Champions League final.

The Portuguese superstar suffered an injury in the 2-2 Clasico draw with Barcelona on May 6, before making a goalscoring return to action and completing 62 minutes from kick-off in Madrid's final LaLiga match of the season at Villarreal last weekend.

Madrid coach Zidane has previously claimed the talismanic 33-year-old will be "150 per cent" fit for the clash with Jurgen Klopp's Reds in Kiev on Saturday.

And while the Frenchman revised that estimate slightly during a news conference at the NSC Olimpiyskiy Stadium, Ronaldo remains a certain starter against Liverpool.

"This is the last training session before the biggest game of the season. One thing you have to know is Ronaldo lives to play these games, so we'll see tomorrow."

Zidane has called up the whole squad for our trip to Kiev for the final! May 24, 2018

There are certain to be disappointed members of the Madrid squad when the team for the final is named, with Karim Benzema, Gareth Bale, Isco and Lucas Vasquez vying to join Ronaldo in attack.

"The players are all very good and there are many players who will be out of the squad or on the bench but we have to think of the team," Zidane said.

"A player can be disappointed but when the game starts that player has to be with the team to support the team. We are united. This will always happen. From the bench they can also bring a lot to the team and that's important.