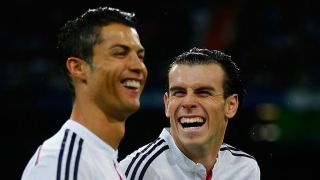 Ronaldo agreed a four-year contract with the Serie A champions in a deal worth €112million that was announced on Tuesday.

Madrid's all-time leading goalscorer leaves the club after winning the Champions League four times in the past five years.

Bale was among those to use social media to bid farewell to the departing superstar, despite their reportedly uneasy relationship.

"An incredible player and a top guy!" Bale wrote on Twitter.

"It has been a pleasure to play alongside you for the last five years.

"Good luck for the future my friend."

An incredible player and a top guy! It has been a pleasure to play alongside you for the last 5 years. Good luck for the future my friend  July 10, 2018

Brazil midfielder Casemiro was another to post a message in support of Ronaldo.

"With you I learned, I enjoyed and I won," wrote Casemiro. "Thanks for everything, my friend."