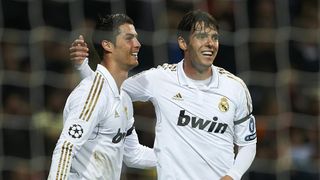 Kaka believes Cristiano Ronaldo's desire to remain motivated at the highest level was the determining factor in his decision to swap Real Madrid for Juventus.

Ronaldo will be presented as a Juve player on Monday after nine trophy-laden years at the Santiago Bernabeu that have also seen him become the Spanish club's all-time leading goalscorer.

Achieving that level of success can lead to a player becoming stale and former Madrid attacking midfielder Kaka says Ronaldo knows now is the right time to seek a new challenge elsewhere.

"I think Cristiano is a very experienced player now, 33 years old so he knows and understands the situation very well," the Brazilian told Omnisport.

"This decision to move from Madrid to Juventus, it's a very conscious decision. He knows [it's] time to move.

"[He's probably thinking] I achieved everything I could with Real Madrid and now it's time to do something different to keep motivated.

"That's what moved him to accept the offer from Juve to change from Real Madrid to the Italian team."

Juve have paid €112million to sign the Portuguese and handed him a four-year deal but Kaka hinted it was money well spent for a player of Ronaldo's calibre.

Asked if the Italian champions were getting one of the greatest-ever players, he added: "I think so. Ronaldo, with his numbers, says that.

"I think Ronaldo will be remembered as one of the best players in the world."