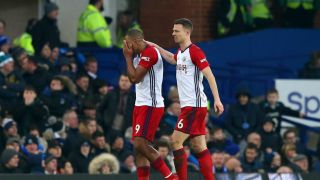 A "devastated" Salomon Rondon has offered his support to James McCarthy after the Everton midfielder suffered a double leg break in the Toffees' 1-1 draw with West Brom on Saturday.

McCarthy picked up the injury as he made a challenge on Rondon, who immediately signalled to the sidelines that the 27-year-old required treatment.

Venezuela forward Rondon was visibly distressed as McCarthy received medical attention on the pitch before being taken off on a stretcher and transferred to hospital.

Everton boss Sam Allardyce confirmed after the game that McCarthy had fractured his tibia and fibula, and Rondon took to social media to offer his best wishes.

Absolutely devastated. Rivalries are forgotten about when a colleague suffers such an unlucky injury. Really hope to see you back playing again soon, .January 20, 2018

In a subsequent statement released by West Brom, Rondon said: "I am absolutely devastated after such an unfortunate incident. I feel really sorry for James.

"Rivalries are forgotten about when a colleague suffers such an unlucky injury.

"Even if the move had resulted in a goal, I would have preferred not to score if it meant an opponent avoided suffering such a terrible injury.

"I wish James a speedy recovery and hope to see him back playing again soon."