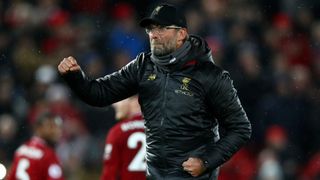 Jurgen Klopp's inside knowledge of the Bundesliga will be an advantage when Liverpool meet Bayern Munich in the Champions League, according to former Reds striker Ian Rush.

Klopp joined Liverpool in October 2015 after a hugely impressive seven-year spell at Borussia Dortmund, during which he guided them to two league titles and a DFB-Pokal triumph.

Bayern have won six successive Bundesliga crowns but are struggling, in relative terms, this season and sit nine points behind Dortmund after 15 games.

Asked if having a German in the Liverpool dugout for the last 16 tie would be a benefit, Rush said: "Yes, it'll be an advantage.

"Jurgen knows all the German teams - he'll have done his homework.

"Bayern have got [Robert] Lewandowski, who's the top scorer in the competition so far so they're a dangerous team.

"But it doesn't matter who you get at this stage. We are at home for the first leg so we have to take advantage of that."

Liverpool reached the final last season, losing out to Real Madrid in Kiev, and Rush is hoping for a repeat in 2019.

"Last season we may have overachieved, we did really well to get to the final. We've set the standard now and we have to maintain those standards."

Liverpool's 3-1 defeat of Manchester United at Anfield on Sunday capped a wonderful seven days in which they also secured their place in the knockout stages of Europe's elite club competition by easing past Napoli 1-0.

Rush said: "We've had a fantastic week, two really big games and came out on top in both. They [the team] are consistent now, we've got a settled side, it's not just 11 players, they have a squad capable now of doing really well."