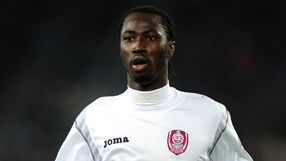 "Traore's transfer is totally in line with the goals that our club has set this season, achieving the highest possible results in the Russian league as well as in Europe," Anzhi general director Aivaz Kaziakhmedov told the club's website.

Traore, 22, joins a host of well-known internationals at the wealthy club from the volatile North Caucasus region, such as Cameroon striker Samuel Eto'o.

Traore, who notched 18 goals in 39 games for Kuban last season, helped the club to eighth in the Russian top flight - their best finish to date.