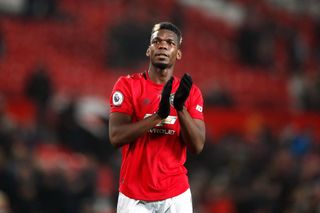 Ole Gunnar Solskjaer has revealed Manchester United are “looking at one or two” players in the January transfer window after it was confirmed midfielder Paul Pogba will be absent for the next month.

The Red Devils suffered a setback in their pursuit of a top-four finish in the Premier League on Wednesday after they lost 2-0 at Arsenal.

United struggled to create chances and failed to move within two points of Chelsea, which only compounded the news from earlier in the day that they will be missing Pogba for the whole of January.

He has been advised to undergo surgery on his ankle and it means the Old Trafford club could be more active than expected in the window, especially with Scott McTominay out with a knee injury.

“Of course it is playing on our decision making when we have two players out – Paul for a month and Scott for two,” Solskjaer said.

“That will give us less options and we have loads of games and important games, but still it has to be right and that is the big point.

“If it’s available and if it’s possible we will do something, definitely. We are looking at one or two.”

One player not moving to United in January is forward Erling Braut Haaland, who has signed for Borussia Dortmund from Red Bull Salzburg.

Quizzed on the player the Red Devils boss knows well, having worked with him at Molde, Solskjaer added: “Dortmund have signed a fantastic boy and I can’t answer more than that.”

Without Pogba and McTominay at Arsenal, Nemanja Matic and Fred lined up together in the centre of the park.

The duo helped United to three points at Burnley, but could not have the same effect at the Emirates.

Solskjaer added: “We’ve been without him (Pogba) all season so the boys who have been playing, they have been fantastic.

“It is a big blow that Paul is out, now that Scott’s out because Scott will be out for a few months and that is a big blow for us. Scott has been magnificent.

“We hoped Paul could come back, he can’t and he will be back in a month, but Nemanja and Fred, if they play like they did (at Arsenal), I’m happy with them because they played well the two of them. ”

United sent Pogba for a scan after he reported pain in his ankle after Boxing Day’s win over Newcastle and it confirmed he needed an operation.

“It is nothing major,” Solskjaer insisted. “It is something that has to be sorted and dealt with, within a time frame.

Arsenal defender Sokratis marked his return to the team with a goal and clean sheet as life under Mikel Arteta continues to show positive signs.

“But when things are in a good way we are happy and I saw today and last week, the players are trying, the fun is back so we have to improve and get better and better.”