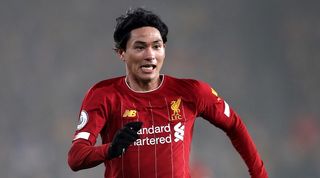 Takumi Minamino says Naby Keita and Sadio Mane have played a big role in helping him settle at Liverpool.

Minamino moved to Anfield from Red Bull Salzburg at the start of the January transfer window in a deal worth around £7.25m.

The attacking midfielder has so far made four appearances for Liverpool, two of which have come in the Premier League.

Mane and Keita are former Red Bull Salzburg players, and the latter shared a dressing room with Minamino for 18 months.

And the Japan international says the two German speakers have been integral to his adaptation to life on Merseyside.

“You know that you are part of the team, but because my English is not good enough yet their help has been really important,” he told Liverpool's official website.

“They are still helping me on some occasions and during the first days they taught me the team rules, things like what time the meetings started and how the team functions on a daily basis.

“At the moment I speak a lot with the players who can speak German.

“By playing in the best environment I learn a lot every day and I can improve myself. I am very happy about being here.

“Even in the training sessions the level of focus and intensity is really high and the players’ motivation is also very high.”

Minamino has also visited landmarks around the city in an attempt to familiarise himself with his new home.

“Because Liverpool is The Beatles’ city, in this sense I was really interested in the city and I wondered what it would be like," he added.

“When I looked around and saw those things for myself I really enjoyed it."

Liverpool are currently on their winter break and will return to Premier League action against Norwich next weekend.