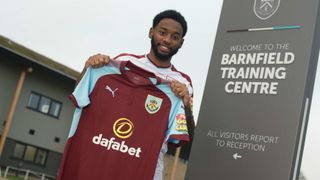 Burnley have completed the signing of Tottenham winger Georges-Kevin N'Koudou on loan until the end of the season.

The 22-year-old has only played once in the Premier League for Spurs in 2017-18, although he scored in his last appearance for the club against APOEL in the Champions League in December.

The Frenchman has now chosen to spend the rest of the campaign at Turf Moor, having spoken with Spurs team-mate Kieran Trippier – who spent three years in Lancashire – before deciding on the move.

"When I spoke with Trippier he told me good things about this club, about the players and everything about Burnley. I am happy to be here, so thank you Trippier," N'Koudou told Clarets Player.

"Everyone is shocked because Burnley is just after the big six [in the table]. They have played very well.

How my new coach welcomed me to the club  very happy to be here hope I will help as much as I can  January 9, 2018

"I watched the last game against Liverpool when they played very well and were unlucky. That's why I have come here: to find football.

"I knew he [Sean Dyche] is a big manager who likes young players and players who go forward, so it suits my character to come here and I am happy to work with him.

"I hope to help the club. If I can, I will. But the last word is with the manager. If he puts me on the pitch I will do everything to help the team go forward.