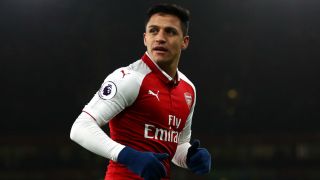 Alexis Sanchez's absence from the Arsenal squad continued on Saturday as Arsene Wenger left him out for the Gunners' Premier League clash with Crystal Palace.

The Chile international appears set for a switch to Manchester United during the January window, as Arsenal seek to avoid losing the forward for nothing when his contract expires at the end of the season.

United are reportedly set to part with £35million, plus Henrikh Mkhitaryan, to secure Sanchez's signature, although Jose Mourinho insisted on Friday that the deal was "not done at all".

Sanchez was left out of the Gunners' matchday squad for last weekend's 2-1 defeat at Bournemouth, and there was again no place for the striker to face the resurgent Eagles at Emirates Stadium.

Mesut Ozil's future is also up in the air, with his deal expiring in June but the Germany playmaker was named from the start, having recovered from a knee injury.