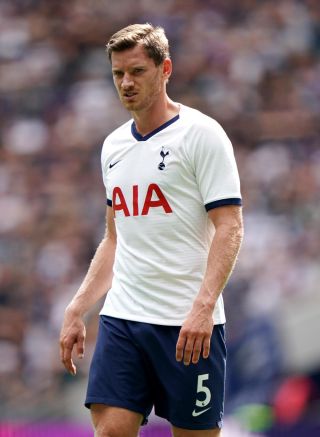 Jan Vertonghen insists he was fit at the start of the season after Tottenham manager Mauricio Pochettino made him wait until Sunday’s north London derby at Arsenal to make his first appearance of the campaign.

The Belgium international missed the opening three games, with Pochettino claiming he had not fallen out with Vertonghen amid suggestions the defender was not fit enough after the summer break.

However, after playing in the 2-2 draw at the Emirates Stadium in which the visitors surrendered a two-goal lead, Vertonghen said he had no fitness issues and revealed Pochettino had told him his exclusion for the games against Aston Villa, Manchester City and Newcastle was for tactical reasons.

“He (Pochettino) said before the first game against Villa it was a tactical decision and I respect that decision.

“I came back fit. I played in every pre-season game and I didn’t miss a session. Like the manager explained, it was a tactical decision and we players have to accept his (Pochettino’s) decisions.”

Despite Vertonghen’s return, Spurs were unable to maintain their two-goal lead, given to them by Christian Eriksen’s tap-in and a Harry Kane penalty following a reckless foul from Granit Xhaka.

Alexandre Lacazette pulled one back on the stroke of half-time before Pierre-Emerick Aubameyang earned the hosts a share of the spoils.

“It is a massive game for everyone and for myself as well to get back in rhythm, and it’s a shame we couldn’t win it,” added Vertonghen.

FULL-TIME: End-to-end stuff at the Emirates and it finishes all square in the derby.— Tottenham Hotspur (@SpursOfficial) September 1, 2019

“I’m experienced and fit enough to get back into the rhythm and it was just the goal before half-time that gave them the spirit to get back in the game.

“If we just killed the first half and go into the dressing room with that good feeling it’s a different game.”

Arsenal had individual errors to blame for their poor start, Xhaka conceding the penalty for a rash foul on Son Heung-min after goalkeeper Bernd Leno had palmed an Erik Lamela shot straight into the path of Eriksen to open the scoring.

Germany international Leno atoned for his error somewhat as he made crucial saves to deny Son and Eriksen.

With Lacazette and Aubameyang once again providing the goals at the other end to earn Unai Emery’s side a point, Leno feels Arsenal have a forward line that can ensure they outscore the majority of their opponents.

“We know about our character but also about the quality,” he said.

“The three players up top, with Pepe also there now, we have unbelievable quality. They can score the big chances but also score from nothing and so the other teams always know and have to be aware that we have a lot of dangerous players and that gives us big confidence.

“You can see the game against Liverpool (a 3-1 defeat) we had one or two chances to score when it was 0-0 so we can score with our quality in that top three.

“We can score against everybody but I think the key is always the balance with the defence because in the end that is the most important thing.”