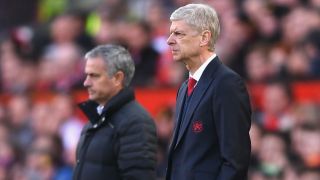 Manchester United's injury problems and crowded fixture list will not offer Arsenal an advantage at Emirates Stadium on Sunday, according to Arsene Wenger.

United are missing a host of key players, including star striker Zlatan Ibrahimovic and a clutch of first-choice defenders.

They tackle Celta Vigo away in a Europa League semi-final first leg on Thursday, manager Jose Mourinho having raised the prospect of being forced to field weakened teams in the Premier League as he attempts to win European silverware and earn the club a route back into the Champions League.

Wenger, though, claimed to be unconcerned with the selection issues confronting his Portuguese counterpart.

"We focus on our performance, I don't know what Manchester United will do," said the Arsenal manager, who saw his side beaten 2-0 by rivals Tottenham last weekend.

"We know anyway they have a massive squad with quality players. Only a top-level performance will get us the win we want.

"The only advantage we can give ourselves is to focus on ourselves and not speculate on any weakness of Manchester United.

"Normally a hectic schedule is what you want. If you have no big injuries we are all equipped in the Premier League to deal with that."

The boss is here...“We want to bounce back and sometimes it’s good to have another big game straight away.”May 4, 2017

Arsenal, sixth in the table, could find themselves competing in UEFA's second-tier competition next term, but Wenger claimed missing out on a Champions League appearance for the first time since 1997-98 will not prompt him to alter his recruitment plans.

Asked if would have to lower his expectations in the transfer market, he said: "I don't think so, we will deal with it if we have to face it, but at the moment we are not there. We will focus on the same players."

The Frenchman indicated holding midfielder Granit Xhaka is unlikely to feature against United, although defender Shkodran Mustafi and reserve forward Lucas Perez are nearing a return to availability.

"Granit Xhaka is still out for the kick he got [against Tottenham]. It's a swollen ankle. There is a little chance [he will be back soon]," explained the 67-year-old.

The defeat to Spurs ensured Arsenal will finish below their local rivals for the first time since the manager took over in 1996-97.

Quizzed on how he has responded to that painful defeat, Wenger wryly replied: "Very badly. Unfortunately in a manager's career you have to go through it.

"This week we have spoken about mental problems," he added, referring to Everton midfielder Aaron Lennon's hospitalisation.

"People underestimate the stress the players are under. You need to be a bit more balanced. In life you always have ups and downs. In our job the ups are higher and the downs are lower. That's what you have to deal with."

Asked if, because of those mental stresses and strains, the job of being Arsenal manager is still worth doing, Wenger said: "Yes, because I love the positive side of it. I love to win. I love to prepare [for] something big, the excitement. To hope to do well."

Wenger, who is out of contract at the end of the season, again refused to reveal a decision on his future, acknowledging he has been proven wrong in claiming an announcement would be made in March or April, but insisting the team's Champions League qualification fate will not influence his thinking.