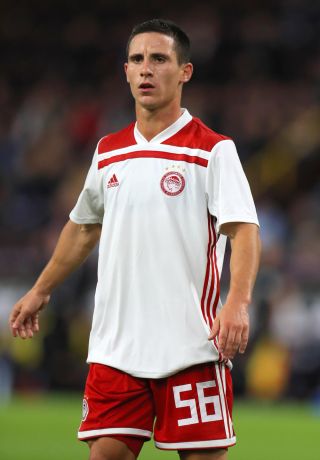 Wolves have completed the signing of Portuguese winger Daniel Podence from Olympiacos on a four-and-a-half-year deal.

The fee is understood to be £17million, which makes the 24-year-old the third most expensive signing in the club’s history behind Raul Jimenez (£32million) and Adama Traore (£18million).

Podence made 40 appearances for Sporting before joining Greek Super League side Olympiacos in August 2018, scoring 11 goals in 64 appearances.

Wolves are now awaiting international clearance for their latest capture, which makes him a doubt to be available for Saturday’s Premier League clash with Manchester United at Old Trafford.

Speaking about his move, Podence told the club website: “I’m very excited. It was always a childhood dream of mine to play in the Premier League and I look at this achievement as a dream come true.

“Wolves are a team with a big project, with ambitious goals to look forward to, where I’ll get to meet former team-mates with whom I had the pleasure to play with in the past and I hope to be very successful here.”

Podence admits one of the main reasons he has joined Wolves is due to the considerable Portuguese contingent at the club.

He added: “Of course, I spoke with Rui, but I also know Ruben, Jota and Moutinho very well.

“I think that’s going to be a big help for me to adapt to English football, which is challenging. It’s really good to have well-known faces around.”

Although Podence has not previously worked with Nuno, he said: “It’s my first experience with this manager.

“But obviously being Portuguese, with him knowing me and me knowing his work, that obviously weighed in me making this decision.”