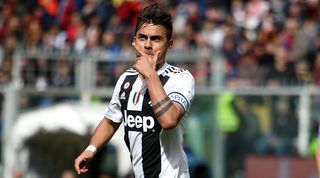 An all-out speedster who’s almost impossible to catch when in full flow, Werner would be an excellent fit for a Liverpool team who are arguably the best in the world at attacking transitions. The Germany international grabbed 16 Bundesliga goals at RB Leipzig as they qualified for the Champions League once more, but his contract expires in 2020 and he isn't interested in renewing. A summer departure feels inevitable.

Werner struggled when asked to lead the line for a possession-heavy Germany side at last summer’s World Cup, but his precise finishing and devastating movement means he has the ability to excel even when space is at a premium.

In a bid to add more guile to their attacking ranks, Liverpool tried to sign Nabil Fekir from Lyon last summer. That deal ultimately fell through due to complications with the Frenchman’s medical, so Jurgen Klopp should make a move for another player who would provide ample creativity in the hole.

Dybala was in and out of the Juventus team this term, with Cristiano Ronaldo taking centre stage in Turin. The Argentine is a wonderfully inventive talent on his day and would help the Reds break down the massed defences they face on a regularly basis.

Andy Robertson has been one of Liverpool’s standout performers this term, but replacing him has proved problematic on the occasions when the Scot has been unavailable for selection. James Milner never looks entirely comfortable when forced to deputise at left-back, while Alberto Moreno is set to seek pastures new at the end of the campaign.

Finding someone who’s willing to play second fiddle to Robertson won’t be easy, but Lato may accept such a situation given that he’s currently the back-up to Jose Gaya at Valencia. Quick, energetic and forward-thinking, the 22-year-old has a bright future ahead of him.

Given his consistently high level of performance in the last few seasons, it’s something of a surprise that Ziyech is still plying his trade in the Eredivisie. The 26-year-old has been one of the stars of Ajax’s terrific campaign at home and in Europe, scoring 19 goals and providing 15 assists from his starting position on the right side of a front three.

An inventive attacker who can create chances via either his dynamic dribbling or pinpoint passing, Ziyech would add a different dimension to Klopp’s frontline.

We're talking about a squad that just achieved the third-highest Premier League points total here, with arguably the world's best centre-back ably supported by Joel Matip and Joe Gomez. But there's nothing wrong with a bit of future-proofing for the right players.

France international Upamecano could be just that. Aged 20 he's already one of the best centre-backs in the Bundesliga, demonstrating composure and ability on the ball that bely his tender years. RB Leipzig nabbed the youngster for €10 million in January 2017 but could sell him for at least eight times that now. Upamecano is likely more of a long-term target, but a future upgrade on at least two of Liverpool's four current srtoppers.

With Naby Keita, Jordan Henderson, James Milner, Fabinho, Georginio Wijnaldum and the returning Alex Oxlade-Chamberlain on the books, Liverpool aren’t exactly short of options in central midfield. Yet for all the qualities that the above sextet possess, the Reds occasionally lack a little imagination in the engine room.

The deep-lying Aouar could provide a solution to that problem. The Frenchman has been in superb form this season, routinely collecting the ball from his centre-backs and kick-starting Lyon’s attacks. At just 20 years old, meanwhile, he'd probably be content to be part of a rotating midfield cast at Anfield.

QUIZ! Can you name the most-used XI from every Premier League team in 2018/19?

EXCLUSIVE Virgil van Dijk: “I’m not going to lie, I was pretty scared – I could have died”​