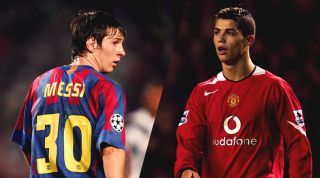 You have five minutes to guess 50 answers. They're all either Lionel Messi or Cristiano Ronaldo, write "M" for Messi or "R" for Ronaldo in the answer box.

They're arguably the two greatest footballers to have ever played the sport.

A decade and a half ago, Lionel Messi and Cristiano Ronaldo rose up at their respective clubs to become the most sought-after wonderkids of their generation. Over time, they became world-beaters, eventually writing themselves into conversations of who was the greatest player ever.

Today, we've got some questions about the pair - but not who's better.

We've got 50 facts about Messrs Messi and Ronaldo. All you have to do is tell us which of the blokes we're talking about.