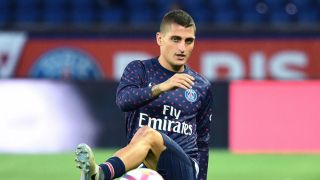 Paris Saint-Germain were given another injury worry on Saturday as midfielder Marco Verratti hobbled out of the Ligue 1 meeting with Guingamp.

The Italy international went down following a challenge with Guingamp defender Felix Eboa Eboa early in the first half at the Parc des Princes and was helped off the field by medical staff.

Thomas Tuchel immediately signalled for substitute Julian Draxler to ready himself and Verratti took his seat on the bench, still deep in conversation with PSG coaches. He soon departed down the tunnel, clutching his left boot.

An injury would come as a real blow for PSG ahead of a big month in which they face a resurgent Manchester United in the last 16 of the Champions League.

PSG already have several fitness worries in the centre of midfield, while Adrien Rabiot is unavailable amid talk of a move to Barcelona. Right-back Dani Alves started in midfield against Guingamp.