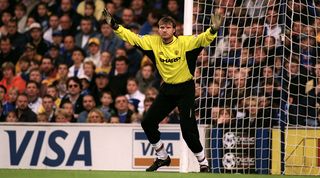 Germany U21 international Baumann had been on the radar of a watching Joachim Low, but promptly gave the worst audition imaginable in a 3-0 loss where he was directly at fault for all three goals.

First he ran out of the area for a bouncing ball and missed it, allowing Maxi Beister to tap into an empty net. Two minutes into the second half he shepherded another harmless punt into his area as if it was a bouncing bomb, which Pierre-Michel Lasogga took full advantage of. For Hamburg’s third goal he fumbled a routine shot for Rafael van der Vaart to stroke home the rebound.

Post-match, Baumann was amazingly sanguine. "It’s not the case that I’m distraught,” he said. “It’s better that it happens in one match than in three. We hope that it doesn’t happen again."

Sure enough he kept a clean sheet in the next game, but Low was nowhere to be seen…

Rachubka had been signed on a two-year contract by Simon Grayson, who had originally bought him at previous club Blackpool. Unfortunately it was six games and out for the California-born custodian, however, who turned out to be a calamitous signing.

In his first full match he handed Coventry an equaliser in stoppage time at Elland Road, then almost cost the Whites three points with two errors against Peterborough.

But he saved his worst for a match against former club Blackpool in November 2011. First he palmed a comfortable shot from Jonjo Shelvey straight to Lomana LuaLua, then spilled a routine cross from Alex Baptiste which led to a converted penalty. Finally, the former Manchester United trainee knocked a 25-yarder from LuaLua to Shelvey, who slotted home.

Home fans had seen enough by half-time, and Rachubka was hauled off to be replaced by 18-year-old debutant Alex Cair. Grayson ominously said post-match: “I’ll keep him out of the limelight for a bit and we’ll work out what we need to do for his long-term future.”

By the end of the month Rachubka had been loaned to Tranmere, before eventually being transfer-listed by Neil Warnock.

In the second edition of the seven-goal Liverpool vs Newcastle thrillers, the Reds were coasting at 3-0 up as Toon boss King Kenny returned to his old club.

Bur suddenly, a dozing James let a weak Keith Gillespie shot squirm under his hands, raced off his line to be lobbed by Faustino Asprilla, and was then nutmegged by Warren Barton.

Luckily for Jamo, Robbie Fowler stole a late winner in the last minute as Anfield erupted. The goalkeeper later admitted why his concentration wandered to Game Over proportions: “I was getting carried away playing Tekken II and Tomb Raider for hours on end.”

Leicester manager Mark McGhee claimed, with some justification, that his side “annihilated” Bolton in this third-round Coca-Cola Cup replay – but the Foxes’ 3-2 defeat was caused by a horrendous home debut performance from 6ft 7in Australian keeper Kalac.

‘Spider’ had a habit of getting tangled in his own web during his time at Filbert Street, and was directly involved in all three Wanderers goals as he dived over a 25-yarder, missed a corner and let a cross slip through his hands. That made it five conceded and five mistakes after a dodgy debut at West Brom, where he dropped two balls to oncoming strikers.

McGhee had prophetically written in the programme notes: “At this stage we all accept that Zeljko is going to be a little erratic. He's not the finished article yet.”

Casillas almost cost Real Madrid La Decima after flapping hopelessly at a cross in the previous month’s Champions League final against Atletico Madrid, only to be bailed out by Sergio Ramos’s 93rd-minute equaliser in Lisbon.

Just three weeks later he was on the receiving end of a 5-1 thrashing by Holland in Brazil, calling it the “worst performance of my career”. Casillas miscontrolled a backpass to let Robin van Persie in, and then missed another inswinging free-kick which was bundled home. “The first thing I have to do is offer a mea culpa,” the 33-year-old admitted.

Unfortunately for Casillas, he probably revisited the confession box five days later when a weak punch led to Chile’s second goal as holders Spain crashed out in the group stage.

After Peter Schmeichel left Old Trafford in 1999, Taibi revealed: “Ferguson’s brother [Martin, himself a former manager] desperately wanted me. It was between me and (Francesco) Toldo — but in the end they chose me.”

Ruud van Nistelrooy and Jaap Stam were more successful recommendations from Fergie’s sibling, but he didn’t get anywhere close with Taibi. The Italian produced a series of monumental blunders in his four games for Manchester United after signing from Venezie for £4.5m.

When a Matt Le Tissier daisy-cutter went between his legs and apologetically crept over the line in a 3-3 draw at Old Trafford, The Sun’s headline screamed “Blind Venetian”.

But it was a 5-0 drubbing at Stamford Bridge the very next week which proved the final straw. Taibi collided with Denis Irwin after missing Dan Petrescu’s cross and allowing Gus Poyet to score, setting the tone for a Sunday afternoon roasting.

The Italian was dropped for the next game and loaned to Reggina in 2000. His replacement, Mark Bosnich, was described by Ferguson as “a terrible professional” while his post-Schmeichel woes continued.

Tottenham and Arsenal were tussling for third place on the last day of the 2011/12 Premier League season to land Champions League qualification – the last available spot as it turned out, thanks to Chelsea’s shock victory in the final that year.

Unfortunately for Spurs fans, Baggies keeper Marton Fulop delivered a performance that might be politely described as third-rate, in his only Premier League appearance for the club.

First, the Hungarian’s needless charge from the penalty area was exploited by Yossi Benayoun. After West Brom struck twice to take a surprise lead, Fulop let an Andre Santos shot sneak in at the near post despite getting a huge hand on it. For the Gunners’ winner, the hosts’ keeper somehow contrived to punch the ball backwards from a corner into the path of a grateful Laurent Koscielny.

“I’m not blaming Fulop for Tottenham missing out on the Champions League, but it seemed that everything that could go wrong went wrong for us in the closing months of the season,” Spurs chief Harry Redknapp later groaned.

Slovenia has produced two of the world’s top keepers in Samir Handanovic and Jan Oblak – but it’s safe to say that Alen Pasagic isn’t from the same class, district or even planet as his contemporaries.

During a 4-1 defeat to Koper in the PrvaLiga, poor Pasagic couldn’t roll out the ball safely or even catch it without falling into the net. Watch and gasp.

Liverpool’s Pole in goal was at fault for both Diego Forlan strikes as the Reds lost to their deadly rivals in the midst of a horrendous 11-match winless run. After Jamie Carragher nodded the ball back to him, Dudek let the ball run between his legs for the Uruguayan to tap in, and minutes later the United striker lashed in a shot that should have never beaten the keeper at the near post.

Dudek was as shaky as his famous knees in Istanbul, lamenting: “I've never known anything like this before. My friends from Poland have been sending me texts telling me that the sun doesn't shine every day.”

After being dropped for Chris Kirkland, he redeemed himself with a superb man-of-the-match performance against United in the Worthington Cup final three months later.

Graham Loader, editor of online Reading fanzine Hob Nob Anyone?, said of Sheppard: “He couldn't kick the ball, never caught corners and failed to redeem himself with shot-stopping.”

But apart from that…

Sheppard’s most comical moment came when he ran out of his area at top speed to collect a through-ball, instead smashing into his own centre-back Dariusz Wdowczyk, who was subsequently out injured for weeks.

The "I've seen Sheppard catch the ball" t-shirt that did the rounds at Elm Park says it all.

BETWEEN THE LINES Joe Thompson: "Cancer felt like a snake wrapping around my neck... I was determined to win"

ACTION REPLAY Remembering Derby's 2007/08: the Premier League's worst ever season, told by the men who were there

WHERE ARE THEY NOW? The 10 best teenagers in Football Manager 2008