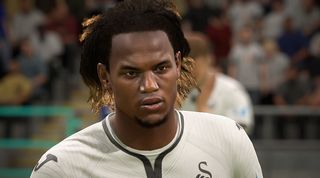 On a yearly basis, EA Sports’ FIFA series updates its selection of player faces, implementing scans and other enhancements in an effort to make them more authentic. This is particularly evident in the Premier League, where the vast majority of players are highly alike their real-life counterparts.

FIFA 18 is no different, so we’ve taken the opportunity to analyse the improvements – as well as new players and teams to the league – to come up with a definitive list of the best Premier League player faces in EA Sports’ latest release. You’re welcome.

The Gunners’ big-money summer signing looks excellent in FIFA 18, and is one of the Premier League’s top strikers in-game.

Although yet to score upon his return to the Premier League, Murray’s 23-goal season in 2016/17 suggests it’s only a matter of time. Right? Oh.

Belgium international Defour boasts a highly detailed player model this year, right the way down to his distinctive neck tattoo.

The 77-rated Musonda was a standout bargain buy in FIFA 17. His rating has slightly dropped this year, despite the facial update.

Currently on a season-long loan at Palace, Dutch youngster Fosu-Mensah gets a welcome upgrade in FIFA 18.

With further faces speculated for release among the Premier League’s ex-Championship teams in the near future, Tom Ince remains Huddersfield’s pick of the bunch for now.

Algeria international Slimani has seen his rating slightly decrease this year, but his player model has never looked better.

After sporting a somewhat cookie-cutter model last year, Matip looks fantastic against the backdrop of Anfield in FIFA 18.

You’re going to want to take advantage of Sane’s 94 pace in FIFA 18. If he ever slows down, you’ll see how good he looks this year.

We feel a great comfort, as if millions of voices suddenly cried out in relief. It’s because Bailly has a (superb) new face scan this year.

The Magpies’ return to the Premier League equips them with a mass of real faces in FIFA 18. Shelvey’s remains as authentic as any.

Italian striker Gabbiadini benefits from some luscious locks and a much-improved facial figure in FIFA 18, despite his decreased rating.

Dutch defender Martins Indi sports an impressive upgraded model in FIFA 18 – and his rating is one better than last year too. Result.

Hornets striker Okaka missed out on last year’s face scan having joined in late August. In FIFA 18, that situation has been rectified. Hooray! (For him, anyway.)

Wales international Hal Robson-Kanu finally gets his just deserts in FIFA 18 – an in-game face worthy of the Euro 2016 semi-finalist.

The Hammers’ 23-year-old left-back finds himself equipped with another 75 overall rating this year, but his player model has received a huge overhaul.