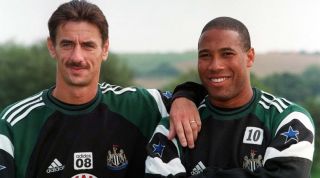 The mitigating circumstances: West Ham’s Icelandic owners were in financial trouble after the banking crisis. The footballing problems: West Ham didn’t get any points in September or March. They didn’t win in October, January or May. They didn’t win away from home after the opening day and only beat two of the top 12.

They didn’t keep a clean sheet between August and Christmas, and only managed one after February. They averaged under a point a game and survived, ultimately, by default as three other teams got 30 points or fewer. And then their new owners, David Gold and the David Sullivan, sacked Gianfranco Zola, appointed Avram Grant and it got even worse.

QUIZ Can you name every team to be relegated from the Premier League?

Everton haven't been relegated since 1951. They've never come closer to going down than in 1998, staying up only on goal difference. Arguably their greatest manager, Howard Kendall, almost presided over a historic low, but his third spell at Goodison Park was an undignified affair.

Everton were bottom in a dreadful November and Kendall’s problems with alcoholism were a factor in a damaging year. Joe Royle’s FA Cup-winning team was broken up, with David Unsworth, Andy Hinchcliffe and Graham Stuart sold, while the disillusioned captain and lifelong Evertonian, Gary Speed, put in a transfer request and joined Newcastle.

The last ever goal in front of the old Kop, before it was replaced by an all-seater stand, was scored by Jeremy Goss as Norwich won. Liverpool lost their status as the last Double winners to Manchester United and finished 32 points behind the champions – in eighth, their lowest finish for 31 years.

They lost nine of their last 14 games and were knocked out of the FA Cup by Bristol City, prompting the departure of Graeme Souness, a legend as a player but an increasing liability as a manager. Other playing greats, in Ronnie Whelan and Bruce Grobbelaar, also reached an anticlimactic end. At least a teenage Robbie Fowler scored 18 goals.

If it was the year that changed everything, it was an inauspicious start for City. Sheikh Mansour’s takeover and Robinho’s arrival catapulted them into the ranks of the super-rich and summer signings Pablo Zabaleta and Vincent Kompany would become club legends, but Mark Hughes played the Belgian in midfield and they spent Christmas in the relegation zone.

A 10th-place finish felt flattering for a club with just two away wins and underwhelming after a then-whopping £74 million was spent in the summer, and a further £40 million in January. Cup exits to Brighton and Nottingham Forest were further lows.

A season that included one of Newcastle’s greatest European nights, the Faustino Asprilla-inspired 3-2 win over Barcelona, and an FA Cup final appearance, but a resolutely miserable league campaign. David Ginola and Les Ferdinand were sold, Alan Shearer injured and Kenny Dalglish’s reunions with Ian Rush and John Barnes backfired.

Newcastle won just two league games between November and April. Second in 1997, the Magpies came 13th a year later as former Great Entertainers mustered a miserable 35 goals. And two members of the board were exposed by a tabloid for boasting of ripping fans off and calling the city’s women “dogs”.

Manchester City’s team of 1937/38 remain the last defending champions to be relegated. There were times in the inaugural Premier League campaign when Leeds threatened to join them in infamy. Howard Wilkinson’s side were saved by fine form which – as they failed to win an away game and conceded four each at Middlesbrough, Ipswich, Manchester City, Nottingham Forest, Tottenham and Norwich – was necessary.

They eventually stayed up by just two points. Their major signing, David Rocastle, struggled, although their transfer business did have a catalytic impact on the title race: Wilkinson sold Eric Cantona to Manchester United and propelled Leeds’s historic rivals to glory.

The transformation from serial contenders to also-rans is rarely as quick or as undignified. After 22 consecutive top-three finishes, United came seventh. The end of Sir Alex Ferguson’s reign and appointment of the beleaguered David Moyes brought drops of six places, 22 goals and 25 points on the previous year.

After a summer of embarrassment in the transfer market, when they missed out on Gareth Bale and Cesc Fabregas and belatedly got Marouane Fellaini, came a season of ignominy. There were embarrassing cup exits to Swansea and Sunderland, and Old Trafford losses to West Brom and Newcastle. Local rivals Liverpool, Everton and Manchester City all did league doubles over United. It was a sad way for Ryan Giggs, Rio Ferdinand, Patrice Evra and Nemanja Vidic to end their United careers.

The Mourinho Season, to use the phrase Antonio Conte coined to mock his predecessor. By the time Jose Mourinho was sacked in December, the defending champions were 16th, having lost to Crystal Palace, West Ham, Stoke and Bournemouth. They eventually limped in 10th, a massive 37 points down on their previous season.

Amid a civil war, fans branded Cesc Fabregas, Diego Costa and Eden Hazard “the three rats”, and the Belgian didn't score a league goal until April. Willian apart, virtually everyone underperformed, including Mourinho... and whoever was responsible for signing Papy Djilobodji.