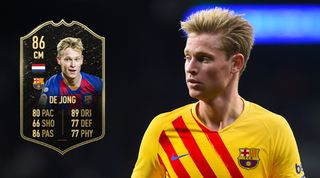 La Liga is home to some of the most creative players in the world. It’s an exciting league to build a team around due to the amount of quality options in each position.

On that note, here’s a look at the best La Liga squad under two million coins.

Note: The FUT market is constantly in flux so player prices may vary.

Real Madrid have conceded the least amount of goals in the Spanish top-flight this season due in large part to Thibaut Courtois’ goalkeeping efforts.

The Belgian shot-stopper will be able to replicate those world-class performances on FIFA 20 thanks to his impressive stats.

Being 6ft 6in, Courtois has a great reach between the sticks, a fact which is further complemented by his diving and reflexes stats, both of which are rated 85 and 87 respectively.

There aren’t many left-backs better than Jordi Alba on FIFA 20. Despite lacking in physicality, the Spaniard boasts other useful qualities which allow him to flourish on the left flank.

With 90 pace, Alba is able to make overlapping runs in the left flank, aiding your team by posing an extra attacking threat with crosses and cut-backs seeing as his crossing stat is rated 87.

Defensively, Alba is immense. He might not be the tallest player on the pitch, but with an anchor chemistry style, he’ll receive a +10 boost to his jumping (91) allowing him to win more aerial duels.

Varane is by far one of the best centre-backs on the entire game. Even when compared to elite icons, Varane still ranks very highly due to his solid combination of stats across key areas as well as his height.

Standing at 6ft 3in, Varane boasts a huge frame, which when coupled with his 86 strength, allows him to shrug players off the ball with ease.

A shadow chemistry style would grant him 93 pace, making him one of the fastest defenders on FIFA 20.

Lenglet is one of the biggest surprise packages on FIFA 20. The Frenchman was largely underwhelming on FIFA 19, but following a +3 boost to his rating on this year’s iteration of the game, he’s turned into one of the best defenders in La Liga, boasting solid stats across the board.

With 81 short passing, you can confidently play the ball out from the back with Lenglet. The Barcelona man also possesses 90 defensive awareness, 86 jumping and 87 interceptions - all without a chemistry style.

Back in October, the best La Liga right-back to sign would’ve been Nelson Semedo, but four months into the FIFA cycle, Dani Carvajal’s 86-rated In-form has proven to be the best right-back in the Spanish top-flight due to how balanced the stats on his card are.

With a shadow chemistry style, Carvajal has 94 pace, 91 defending, 82 dribbling and 82 physicality, allowing him to perform excellently across the right flank.

Frenkie de Jong is a unique player on Ultimate Team. The Barcelona man is a midfield maestro who doubles as a defensive powerhouse thanks to his rather unusual combination of stats.

The Dutchman boasts 90 shorting passing and 86 long passing which allows him to ping the ball back and forth with incredible accuracy. He also possesses 88 dribbling and an 80-rated interception stat which goes up to 91 with a shadow chemistry style.

James Rodriguez received a major upgrade on his NIF card during the Ultimate Scream promo, earning himself a card that saw him become one of the best midfielders on FIFA 20.

With 88 shooting, 88 passing and 88 dribbling, you can count on Rodriguez to put up some impressive displays for your Ultimate Team and if you try hard enough, you might just be able to replicate his worldie from the 2014 World Cup.

What Modric lacks in physicality, he makes up for with his passing and dribbling as the Croatian midfield maestro possesses the ability to create goalscoring opportunities out of nothing.

With high/high work-rates Modric will be constantly looking to influence both ends of the pitch.

The 90-rated man boasts 92 agility, 92 composure, 82 interceptions and 89 passing, making him one of the best midfield engine’s on the game.

When it comes to scoring goals and creating assists on FIFA 20, there aren’t many players better than Eden Hazard on that front.

The former Chelsea man feels incredibly smooth on the ball as he’s able to make sharp turns and take players on with ease thanks to his 94-rated dribbling stat - one of the highest in FIFA 20.

You can’t go wrong with Hazard in your team.

EA Sports, perhaps for the first time ever, were able to truly replicate Messi’s real life influence on a FIFA title. For years, Cristiano Ronaldo has been the ‘META’ but on FIFA 20, Lionel Messi is finally as effective as he should be.

Messi boasts 96 dribbling, 92 passing and 92 shooting. With a hunter chemistry style boost his shooting stat will go up to 97, whilst his pace will peak at 96, further complementing his expansive skillset.

Messi might be a costly card to get on Ultimate Team, but trust us when we say he’s worth every coin.

Griezmann has been quite inconsistent for Barcelona since signing for them last summer, but you can count on him to be consistent for Ultimate Team, thanks to his impressive stat combination.

Strikers on FIFA tend to have low passing stats, Griezmann, however, boasts 84 passing, allowing him to make quick and accurate 1-2 passes with other players as you make your way into your opponent’s 18-yard-area.

With a hunter chemistry style, Griezmann will have 91 pace and 92 shooting, making him incredibly OP.

While you're here, why not take advantage of our brilliant subscribers' offer? Get the game's greatest stories and best journalism direct to your door – for only £10.25 every three months – that’s just £3.15 per issue! Save money with a Direct Debit today. Cheers!

QUIZ Can you name every FA Cup winning team ever?