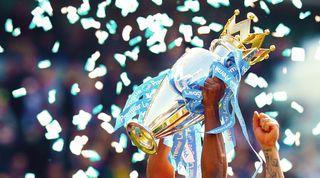 Five minutes on the clock, 120 clubs to guess - obviously, quite a few clubs have won it more than once.

It's the ultimate accolade for any footballer - no, not a place in Garth Crooks's team of the week, but a medal for winning the league title.

Ever since the late 1880s, when Queen Victoria sat on the throne no less, the best sides in the country have battled it out to become champions of England. That's right - football didn't start in 1992.

We've had 120 champions now. The only times that the English league ever paused was for World Wars I and II, but unlike a lot of countries, there all kinds of different names across history.

Scottish football has always been dominated by Celtic and Rangers; Italy has only had a handful of champions, and Real Madrid were always a force in Spain. But English football is divided by dynasty; different clubs dominate decades.

Today, we'd like you to name as many English league champions as you can in the five minutes available. Piece of cake, right?