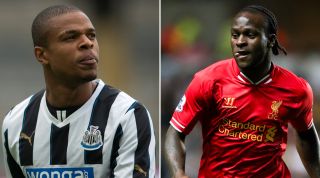 A guaranteed seven-goal thriller. What do you mean it’s not the 90s anymore?

“We cannot completely forget what they did to us,” sobbed midfielder Vurnon Anita earlier this week. But Alan Pardew’s men can’t afford to dwell for too long – they’ve got back-to-back wins up for grabs.

The Magpies grabbed a useful win at Cardiff before the international break thanks to Loic Remy’s brace – his fourth and fifth goals in just three games. Team-mate Cheick Tiote has led the calls for the Frenchman to sign permanently, and it seems inevitable that it’ll be wrapped up in January if Pardew has his way.

There are still question marks over a leaky back-line that’s only shipped fewer goals (12) than Crystal Palace and Sunderland, but Newcastle look in better shape than they did last season (which, honestly, is easier than a lame joke about Joe Kinnear).

They will, however, have a Liverpool side flying high in second to contend with. The Reds have won five of their seven games this season, though admittedly against teams they should be beating, Manchester United aside.

Still, that’s better than last season where Rodgers is concerned. Daniel Sturridge is firing (six goals in seven), a “calmer” Luis Suarez is back with his best (three in two), and even Jordan Henderson has ditched the critics. "We demand that we maintain our standards at all times,” declared the Reds chief. Well, back over to you then…

Newcastle skipper Fabricio Coloccini is out with a groin injury, but Steven Taylor (hamstring) will return to deputise.

Left-back Massadio Haidara (knee) is also in line for a return, but Ryan Taylor (also knee) remains out.

Liverpool are still without Glen Johnson (ankle) but could welcome back new signing Aly Cissokho (ankle) and Joe Allen (hamstring) after recent injuries.

Up until recently, Newcastle fans could have been forgiven for casting their minds back to those halcyon days of 2011/12 when strikers did that funny thing of putting the ball in the back of the net. Demba Ba bagged 15 in as many matches up to the New Year, before his Senegalese partner in crime, Papiss Cisse, took the baton with 13 in just 12 games as the season ended with a fifth-placed finish.

But by Jove it seems Pardew has finally cracked it with France international Remy, whose recent goal-getting exploits have given Toon fans reason for optimism again. Against Hull and Cardiff he netted braces cutting in from the left, but it’s possible Pardew will use him centrally against a stronger Liverpool side, where his non-existent defensive work can be largely ignored.

The screens suggest a striker making the most of limited opportunities. If he can involve others more frequently too (he made just 16 passes at Everton), the likes of Hatem Ben Arfa & Co. might also find some joy.

Life is rarely dull for Pardew on Tyneside, so you can bet he’ll have enjoyed the international break on the back of a Magpies win last time out. But, back to business this week, the silly sausage couldn’t help himself when questioning owner Mike Ashley’s football sense (“it confuses and upsets him”). Come on Alan, just give yourself a break once in a while.

Rodgers, meanwhile, has been no less gushing in his praise for the confident Reds – which, to be fair, finally seems warranted.

The duo have met on four occasions, twice last season when a 1-1 Anfield draw was followed by that Tyneside harrumping, and again in 2011/12 when Rodgers was Swansea boss. His side grabbed a goalless draw in the North East before losing 2-0 at the Liberty Stadium.

With Coloccini missing and Taylor (oh, come on) partnering Mapou Yanga-Mbiwa in his place, expect the Magpies’ defensive woes to continue. Sturridge and Suarez are men in form – 1-3.