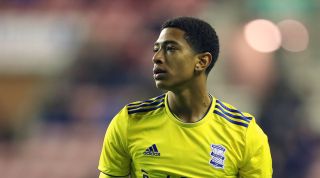 Jude Bellingham is the next big thing - at least according to Football Manager, Birmingham City fans and countless YouTube compilations of the teen, who has lit up St. Andrews this season.

Borussia Dortmund have finally landed the midfielder's signature, in a deal said to be worth around £23m to the Blues, with a five-year contract for the teenage.

It's the end of a six-month saga. While Dortmund were interested in Bellingham back in January, pretty much every top club in the Premier League has been linked with him, too. Arsenal, Tottenham, Liverpool, Wolves and Chelsea have all apparently scouted him, with Manchester United the Germans' main rivals in the race for the 17-year-old.

So why were everyone so keen? Here’s everything you need to know about the midfielder.

We were ahead of the curve in February last year, when we included Jude Bellingham in our list of the 50 most exciting teenagers in English football. He may have been at 49, but that's not bad when you’re only 15: he was the second-youngest player on the list.

Since then, the rest of the football world has sat up and taken notice of Bellingham’s talents. A leggy midfielder comfortable on either foot and able to slalom through challenges with ease, Bellingham took up a two-year scholarship with Birmingham in June last year.

You could have yoghurt in your fridge older than Jude Bellingham. Bring Me To Life by Evanescence was number one in the charts when he was born – having knocked Ignition (Remix) by R Kelly off the top – and Roman Abramovich bought Chelsea just a few weeks later.

In August last year, at the age of 16 years and 38 days old, Bellingham became Birmingham City’s youngest ever first team player, beating the record set by Trevor Francis, which had stood for a whopping 39 years. That’s a record old enough to be his dad.

Jude is the eldest son of Mark Bellingham - a sergeant in the West Midlands Police, but more excitingly, a legend of non-league football.

Records are hazy that far down the football pyramid but Bellingham Sr estimates that he's represented 15 clubs - including Leamington, Sutton Coldfield and Stourbridge, the town in which Jude was born - and scored around 700 goals in about 850 appearances. It’s a hell of a record - assuming of course that Bellingham hasn’t inflated his own statistics, like a non-league Pele.

In the eternal debate of Messi vs. Ronaldo, Jude Bellingham knows which side he’s on.

Judging from his Twitter feed, Bellingham appears to be a big fan of Lionel Messi –retweeting posts describing the Barcelona No.10 as the greatest of all time. It’s perhaps no surprise that the 17-year-old favours the Argentinian - Bellingham is also a player who enjoys dribbling in central areas in front of defenders, just like the small man himself.

It’s perhaps fair to say that most of us lack any kind of leadership skills at the age of 16 - but Bellingham captained the England under-17 side during the Syrenka Cup last year.

The friendly tournament was eventually won by England, with Bellingham picking up the Player of the Tournament award. He scored against Finland and Austria before the Three Lions defeated Poland on penalties in the final.