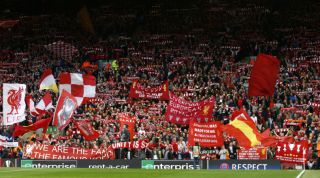 The big talking point: Tradition. It’s certainly a fixture which the television companies milk for all its worth, layering it with more hyperbole every season, but it remains the biggest club game in England.

What will happen: Liverpool will miss Sadio Mane, who has returned from international duty with a hamstring strain. It's particularly galling for Jurgen Klopp, as Mane has only just returned from a three-game suspension and Liverpool are inarguably more dynamic and dangerous with him in the side (they average 2.2 goals per Premier League game with him and only 1.6 per game without him).

What won’t happen: Marouane Fellaini won’t play either (also injured), so there goes Jose Mourinho’s favourite away-from-home-in-a-big-game tactic. The manager's obvious preference would have been to use Fellaini as a means of playing around Liverpool’s press, but he will presumably now opt instead for Ander Herrera. The Spaniard’s passing will be an asset and he would be a provocative inclusion at Anfield, but he’s only completed 90 minutes once this season (vs CSKA) and has started just a single Premier League game (vs Stoke).

The big talking point: Sean Dyche vs The Numbers. By quite a margin, Burnley have conceded more shots per game this season than any other team in the Premier League. Yet they're sixth. The analytics community is surely livid.

What will happen: Rather unfairly, Burnley's reluctance to conform to numerical reasoning has prevented them from getting the recognition they're probably owed - and, should they beat West Ham, they will presumably continue to be dismissed as an anomaly. Dyche has some rough edges and his "doing the best I can with what little I have" schtick isn't for everyone, but his team's start to the season really has been excellent.

What won’t happen: This result won’t have any effect on Slaven Bilic’s future. In spite of the snarky exchanges which followed the close of the transfer window and the sense of inevitability which radiated from then, Bilic is - according to reports in the press at least - now safe until the end of the season. Club and coach are staying together for the kids, it seems.

The big talking point: Wilfried Zaha. With seven games played and no goals scored, Palace need Zaha free from injury as soon as possible. Good news: he’s back in training and back in contention for the first time since the opening day of the season.

What will happen: Antonio Conte will have to replace two critical pieces. Alvaro Morata and N’Golo Kante are both ruled out by injury and that’s a problem - perhaps not this weekend specifically, but it certainly adds a complication to the Champions League trip to Roma next week. Anyway, how to replace them? There are enough goals at the top of Conte’s formation to cope without Morata, either by promoting Michy Batshuayi to the starting line-up or incorporating Eden Hazard or Pedro as a false nine, but no other Chelsea midfielder can replicate the security that Kante provides.

What won’t happen: Palace have been losing at half-time and full-time in all of their last five games. Don't expect that to change. This is a game to get out of the way for Roy Hodgson. A spirited performance would help, but the recovery starts next week.

The big talking point: How good can City become? Not how good they are at the moment, but what will they evolve into. Week-to-week, it’s exhilarating finding out.

What will happen: City currently average over 4% more possession per game than any other side in the league (63.8%) and that’s what most would expect from a Pep Guardiola side. What wasn’t anticipated, though, was this team’s quick attacking growth. Kevin De Bruyne is among the most destructive players in the country at the moment and growing around him are all sorts of potent combinations. City are a joy to watch and, inevitably, they will be so again here.

What won’t happen: Fabian Delph won't play. Having been called up by England for the first time in a year, he was forced to withdraw. A really tough break, particularly given that he seemed to have adapted so well to that makeshift left-back role in Benjamin Mendy's absence.

The big talking point: Renato Sanches. Three starts for Swansea so far and no real contribution of note. Most would have expected that, given how little football the midfielder has played over the past year, but his loan club’s need is pressing and he’s owed no special favours on account of his bright future.

What will happen: Swansea will play a game they’re expected to win. That’s an awkward situation for Paul Clement to be in because, while he’s succeeded in making the team tougher to beat, his cautiousness has started to antagonise some of the natives. Huddersfield aren’t a weak opponent, but they received a harsh lesson from Tottenham two weeks ago and, sensing some vulnerability, the locals will expect their side to chase three points.

What won’t happen: Goals. Huddersfield will be perfectly entitled to their caution, but Swansea's reticence is less tolerable. As per the above, they're not a team who really look comfortable on the front foot, which is evidenced by the paltry three league goals they've managed to score all season. When fit, Wilfried Bony should help in that regard, but that seems some way off.

The big talking point: Tottenham’s focus. Spurs will play Real Madrid in the Bernabeu on Tuesday and that’s exactly the sort of glamour fixture which can cause problems. Mauricio Pochettino will naturally be keen to record a first Premier League win at Wembley, keener still to keep his players’ minds in the present.

What will happen: Bournemouth kept their first clean sheet of the season against Leicester, but they don’t fit the profile of side capable of frustrating Spurs. Swansea managed it but by sitting deep, remaining organised and protecting their own box. Burnley did something vaguely similar on their visit to Wembley, but Eddie Howe’s side aren’t really equipped to copy those sides. That spells trouble and this should end up being relatively comfortable for Tottenham.

What won’t happen: There will be no Danny Rose for Tottenham this weekend, but their mutinous full-back is nearing a return. That will be interesting; his verve is obviously important to Pochettino, but rarely do supporters forgive players for publicly airing dirty laundry as brazenly as Rose did.

The big talking point: Arsenal's defensive shortage. Shkodran Mustafi is out, Laurent Koscielny too, while Sead Kolasinac limped out of Bosnia's game in midweek with a hip injury.

What will happen: The start of Jack Wilshere watch. Fun. The midfielder's name has started to be mentioned again in England press conferences and is seen by some as the answer to Gareth Southgate's lack of midfield thrust. If Wilshere starts here, so will the debate.

What won't happen: Watford aren't getting rolled over. They recovered well from their humilation by Manchester City (a real sign of mental durability) and have picked up four points from their last two games (Swansea and West Brom, both away from home). Arsenal will again likely be without Mesut Ozil and, having flown back from South America this week, Alexis Sanchez's condition (or mood) isn't likely to be great. Expect Watford to be stubborn; Marco Silva has lost Nathaniel Chalobah to injury, but his three-man midfield protects his back-four particularly well and, in Richarlison, they carry an interesting threat down the left side.

The big talking point: Ronald Koeman’s future. All asterisks about player turnover aside, Everton have been desperately poor this season - no more so than in their loss to Burnley at Goodison Park. Another defeat here, to a side justifiably expected to be fighting relegation, and Koeman would start to look extremely insecure.

What will happen: Brighton might have limitations, but there’s a vibrancy to Chris Hughton’s side which is hard not to admire and which, in all likelihood, Everton will fail to match. The Toffees look stale, they look dysfunctional, and without sweeping changes to their midfield (Tom Davies’s peripheral role is baffling in that regard) the skies are likely to darken further.

What won’t happen: More on the Davies point, given Idrissa Gueye and Morgan Schneiderlin are likely to start ahead of him. Koeman's teams may be known for their rigid centres, but a more dynamic midfielder is such an obvious cure for Everton's current stodginess. His absence is very difficult to rationalise.

The big talking point: How this game, with its shy collection of forwards and shared emphasis on defending, was picked for television.

What will happen: A goalless draw. By the time this game takes place, it will be almost two months since Southampton scored at St Mary’s. There’s a reason for that: flawed under Claude Puel and not yet adjusted to life under Mauricio Pellegrino, they look very much like a side being built from back-to-front. Defensively they’re solid - as are Newcastle - but while their shot volume is healthy, the type of chances they’re creating aren’t nearly good enough. They’re very much a work in progress and there’s no sign of a tipping point yet.

What won’t happen: Less "what won't happen" and more "what won't be mentioned" - and that's Mario Lemina's midfield parternship with Oriel Romeu, which already looks excellent for Southampton. One to watch, certainly.

The big talking point: Craig Shakespeare, who is looking less convincing by the week. Five points from seven games and just one win all season (against Brighton) hasn't provided any concrete reassurance that he's the right long-term option at the King Power.

What will happen: We'd tip West Brom here. Tony Pulis suffered through what was generally a dreadful September, with his side picking up just two points and scoring only four goals. Still, the performances against Arsenal and Watford showed a trend of improvement, particularly with the ball, and that should continue here.

What won't happen: Any sighting of Kelechi Iheanacho seems unlikely. What a strange situation. On the one hand, it's quite understandable that Shinji Okazaki and Jamie Vardy are being preferred but, on the other, Leicester must have anticipated that being the case before they spent £30m on the Nigerian.