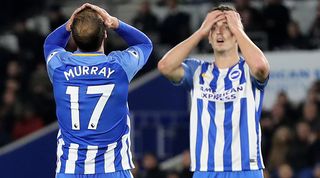 It’s a bit cruel to pick on Lewis Dunk, as the Brighton centre-back is actually having a strong season. His three goals in 18 games would be very impressive for a defender too – if they hadn’t all come at the wrong end.

Yep, the 26-year-old already has a trio of own goals in his first Premier League season (which naturally means he’s being linked with West Ham; long-term kings of comedy defensive stylings). However he's not involved in this quiz yet.

We’ve listed every player to score at least five own goals in the Premier League era, right up to all-time leader on 10. They’re all defenders and most are – like Dunk – actually pretty good players, because you don’t get to play enough minutes to rack up these own goals if all you can do is out the ball in your own net.

Six minutes are on the clock and clues are a player’s o.g. total, the Premier League clubs they’ve played for and nationality. Tell us your score @FourFourTwo – and please challenge some pals as well, as the more people who play, the more quizzes we can make. Ace.

*Still active and playing in the Premier League