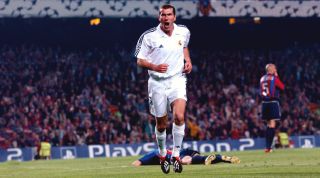 Five minutes on the clock, 20 players to guess.

NOW TRY Quiz! Can you name every English club to qualify for Europe since 1992?

Now that the Premier League season is over, we can crack on with the important stuff, right?

The transfer season is a sport all of its own. One that brings the worst out of all of us, as we sit cheering our teams on from the comfort of behind our screens, refreshing the rumours feed on sports websites, and trusting any old avatar on Twitter who claims to know someone working at the Chelsea club shop.

This is the season that makes fools out of all. The season in which we convince ourselves that £20m for an uncapped English full-back isn't that much money; where we think of the most ludicrous swap deal that could feasibly happen; where we threaten to disown our club if they don't invest last season's TV money into a wise purchase.

It's come round again. And it's madder than ever. We might not top last year's fees, but we're going to give it a damn good try.

FIFA 21 Everything we know so far