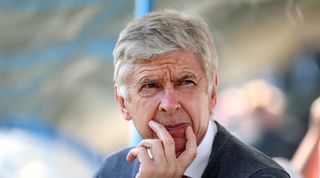 A scrappy, forgettable game at Turf Moor to end Burnley's excellent season - and the first goal had an element of slapstick. Chris Wood headed headed in after Ashley Westwood's miscued volley. After half-time, Josh King rounded off a good personal season, bending in a fabulous equaliser fifteen minutes from time. Certainly his best of the year, maybe one of Bournemouth's too. Eddie Howe's team have been sleep-walking towards the beach for some time, but they finished strong, Callum Wilson scoring the game's third and final goal in stoppage-time

Not the best. Palace have been home and dry for some time, while West Brom will just be happy for this season to end. Wilfried Zaha eventually opened the scoring - of course - and that was fitting, given his role in their rejuvenation. Patrick van Aanholt, another strong performer during these final months, then added a second (via some goalline technology), sealing the win and a strong final week for Roy Hodgson and his players.

A day when the football was really incidental. Huddersfield supporters were in party mode following their draw at Stamford Bridge in midweek, while Arsenal fans headed north to bid Arsene Wenger farewell. The visitors took the lead, too, with Pierre Emerick Aubameyang continuing his good start to Premier League life. Wenger signs off with a win and Huddersfield will just be happy to be back in August.

A simple enough task for Liverpool, who needed just a point to confirm their Champions League place. Mohamed Salah scored his 42nd goal of the season, finding the bottom of the net from twelve yards, to give them the perfect start. It was also his 32nd league goal of the season, a new Premier League record. Dejan Lovren made it two just before half-time, thumping in a header after Brighton had failed to clear a corner. It got easier after the break, too, with Dominic Solanke adding a third (with the first league goal of his career) and, after an understandably slow second-half, Andy Robertson made it four. Liverpool sign off ahead of the Champions League final in style.

A low-key day at Old Trafford with little to play for. Michael Carrick was making his final professional appearance and was given a guard of honour onto the pitch - and, once the game began, he was the architect of its first goal, creating the space for Juan Mata to tee-up Marcus Rashford. It proved to be the game's only goal and, in tediously typical Mourinho fashion, United's only shot on-target.

Newcastle played very well against Tottenham on Wednesday night, creating plenty of chances but getting little reward. Here, they did: Dwight Gayle put them in front against a sleepy Chelsea who seemed resigned to their Europa League fate. News from Anfield evidently reached the visiting dressing-room, as Chelsea actually got worse after the break: Ayoze Perez made it two-nil 15 minutes into the second-half, then added a third five minutes later. Chelsea will head to Wembley for the FA Cup final next week, but this was truly laughable at times.

Not a game to dwell on for too long. City have been champions for a couple of weeks and, by virtue of their superior goal-difference, Southampton were under no real threat of relegation. It showed. John Stones came close to opening the scoring for the visitors, just failing to connect with a free-kick, but news from south Wales inevitably made this a non-event. Gabriel Jesus snatched the points in stoppage-time, but the result had long since become academic.

This always looked like a thankless start for Swansea given the goal-difference involved, but they started well enough: Andy King scoring from the edge of the box. Badou Ndiaye didn't read the script, though, equalising for Stoke with a neat, lifted finish. It got worse, too, with Peter Crouch heading in a free-kick to give the visitors the lead before half-time. It might have got worse, too, with Xherdan Shaqiri missing a second-half penalty. That's how it stayed though and, with no miracle in Southampton, Swansea's Premier League tenure is now over.

Not the start Tottenham were looking for here, as Jamie Vardy headed in from a free-kick after just four minutes. Harry Kane continued to recover his form shortly after, though, running in on goal to equalise less than three minutes later. Leicester looked to have signed off weeks ago, but they too were looking to finish the season well: Riyad Mahrez restored their lead after a loose ball dropped to him. Half-time arrived, then came the silliness: first, Kelechi Iheanacho extended Leicester's lead, firing in emphatically from distance, before two quick Erik Lamela goals brought Spurs back to 3-3. Very end of season at Wembley. Within an hour, Lamela had completed his hat-trick (ten minutes) to put Tottenham in front.

A crazy game wasn't done there, though, with Jamie Vardy scoring the eighth of the afternoon to make it 4-4. Harry Kane wasn't finished either, and he bent in an excellent second to make it 5-4 Tottenham and lift Mauricio Pochettino's team back to third.

A derby of unpopular managers at London Stadium, with neither David Moyes nor Sam Allardyce expected back for 2018-19. Moyes got the better start of the two, with Manuel Lanzini giving West Ham the lead five minutes before half-time and, just over an hour into what was a generally uninspiring contest, Marko Arnautovic capped an excellent 2018 with his side's second goal. Everton dead and buried, Allardyce with very little case with which to make his continued employment. Everton did briefly rally, with Oumar Niasse pulling a goal back, but West Ham quickly stamped out any threat of a comeback, Lanzini scoring again to wrap up the points.