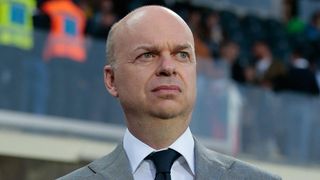 AC Milan have confirmed Paolo Scaroni has been elected as the club's new executive chairman following the takeover by Elliott Management.

Marco Fassone has left his role as chief executive as part of the changes at board level, the Serie A club announced on Saturday.

Scaroni will run the club until a new chief executive is appointed with Marco Patuano, Franck Tuil, Giorgio Furlani, Stefano Cocirio, Salvatore Cerchione, Alfredo Craca and Gianluca D'Avanzo added to the board.

"I am humbled by the opportunity to lead AC Milan's board of directors, and grateful for the trust and support of my fellow board members," Scaroni said in a statement.

"This is a critical moment in the club's storied history, and we're all grateful to have a new owner committed to return AC Milan to its former glory.

"At the board level, we will do everything possible to put the coach and the players in a position to succeed. There is considerable hard work ahead, and we are eager to build upon today's momentum."

The US-based hedge fund's takeover follows Elliott previously teaming up with Li Yonghong, who has been ousted as Milan's president and responded angrily in an open letter published by Il Sole 24.

"Elliott showed itself from the start to not be the partner I imagined," Li said, adding he would fight for the ownership of the club.

Paul Singer, founder of Elliott, is concentrating on getting the Serie A club on the right path, with the club targeting a return to the Champions League.

"The election of a new board marks another step forward in getting AC Milan back on track," Singer said in a statement. "Elliott is well positioned to deliver financial stability and proper oversight, the building blocks of on-field success and a world-class fan experience.

"We recognise the prominent place AC Milan occupies in the football world and are cognisant of the responsibility that comes with owning such a storied franchise."

Milan have been reinstated to the 2018-19 Europa League after the Court of Arbitration for Sport ruled the club's ban from the competition was not proportionate to breaching Financial Fair Play regulations.