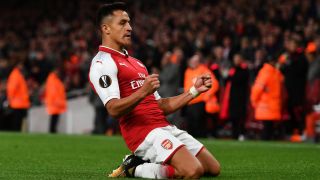 Alexis Sanchez's expected move to Manchester United appears to be imminent after the Chilean took to social media to show himself boarding a plane ahead of a reported medical.

Sanchez's future has long been a hot topic in the Premier League, with Manchester City nearly snatching him from Arsenal for a figure thought to be £60million in August.

But Arsenal pulled out at the last minute, reportedly due to their inability to secure a replacement at such short notice, forcing Sanchez – who had entered the final year of his contract – to stay put.

Speculation about City's interest remained and a reunion with Pep Guardiola appeared a formality at the start of January, only for United to come in and provide a better offer for both Arsenal and the player, with Henrikh Mkhitaryan expected to go the other way in a swap deal.

Both Jose Mourinho and Arsene Wenger have acknowledged that a move is close and, although neither club has announced an agreement, Sanchez fuelled rumours of a scheduled medical on Sunday by taking to his official Instagram account and posting a video of himself boarding a private jet.