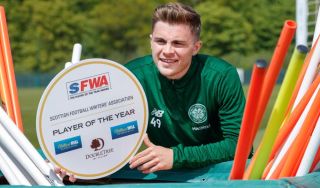 Celtic winger James Forrest has scooped a player of the year double.

Forrest has been named Scottish Football Writers’ player of the year after earlier winning the PFA Scotland award.

The 27-year-old also won the journalists’ international player prize after his five goals in two games against Albania and Israel fired Scotland to top spot in their Nations League group.

Forrest has netted 17 goals for Celtic this season and saw off competition from team-mate Callum McGregor plus Rangers pair Allan McGregor and Alfredo Morelos to take the prize.