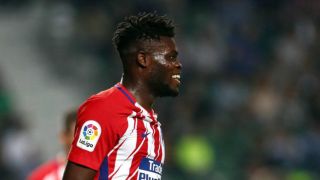 The big "will they, won't they" saga of Arsenal's summer is set to end today - with Arsenal looking to make a final bid for Atletico Madrid's Thomas Partey.

Arsenal have been targeting Partey since after lockdown, as Mikel Arteta has looked to add steel to his midfield. The Gunners were hoping that they could come to an arrangement that would see either Lucas Torreira or Matteo Guendouzi heading to the Wanda Metropolitano in exchange.

While Lucas Torreira is undergoing a medical in the Spanish capital Diego Simeone remains strong on his stance regarding the Ghana international. Atletico do not want to part with Partey unless his £45m release clause is triggered in full.

Arsenal are now going to bid one last time for their man. Whether it is for the full £45m is unknown.

Arsenal's signings have been reliant on the North Londoners shifting out deadwood this window. Arteta has been keen to move the likes of Guendouzi and Torreira on, along with Sokratis, Sead Kolasinac and Shkodran Mustafi. Emi Martinez to Aston Villa is still the only significant player to have left.

Arsenal were hoping to tie up a deal for Houssem Aouar but that deal is now dead in the water. Hopes of signing Jorginho from Chelsea also appear slim - but given his similar profile to Granit Xhaka, he is perhaps not the player that Arteta needs.

Another former Stamford Bridge hero, Oscar, has been mentioned too. Arsenal were rumoured to be interested in taking him on loan.

After yesterday's victory at home to Sheffield United, Arteta suggested that the club were in the market for new players and that he had "full backing" from KSE, who own Arsnal. The Gunners' only major signings this summer have been Willian, Gabriel and Alex Runarsson.