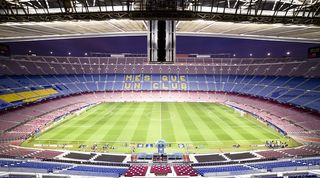 Barcelona have claimed top spot in the Deloitte Money League for the first time, overtaking Real Madrid at the summit.

The Deloitte Money League ranks clubs around the world based on their revenue generation.

The 23rd edition of the table was released on Monday, and it makes for positive reading for those of a Blaugrana persuasion.

Barcelona occupy first place based on figures for the 2018/19 season, in which they made €840.8m - and became the first club to post numbers in excess of €800m.

Deloitte credited the club's decision to bring control of merchandising and licensing activities in-house, a change which allowed the La Liga champions to increase revenue.

Real Madrid fell to second after generating €757.3m in the period covered, with Manchester United in third on €711.5m.

United's position as the richest club in England could come under threat next year, in part because their failure to qualify for the Champions League this term will lead to a drop in income.

Tottenham (€521.1m) rose to eighth - their highest ever position in the standings - and are now London's highest-placed club for the first time since 1996/97.

“The impact of participation and performance in UEFA club competitions on revenue is evident in London and the northwest, with the rise of Liverpool, Manchester City and Spurs driven by reaching the Champions League knockout stages," said Sam Boor of Deloitte's Sports Business Group.

“The relative decline of Arsenal is a direct result of not participating in the competition for a second consecutive season, a fate that may also befall Manchester United.”

There were two new entrants in the list of 20: Napoli squeezed in after rising one place from 21st, while Lyon sit 17th in this year's list.