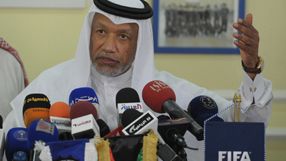 The Court of Arbitration for Sport (CAS) hearing was due to last two days although a decision is not expected for several weeks.

Bin Hammam was not among the officials who entered the building for the hearing, a Reuters television cameraman at the scene said. Sources close to the hearing said the Qatari former head of the Asian Football Confederation would not attend.

Instead, he would be represented by his team of American and Swiss lawyers.

He withdrew his candidacy and was then provisionally suspended days before the June election over allegations that he had tried to buy the votes of Caribbean officials by handing them $40,000 each in brown envelopes.

Blatter was subsequently re-elected unopposed for a fourth term as FIFA president, while Bin Hammam was found guilty of breaking seven articles of FIFA's ethics code, including one on bribery.

He was banned for life and subsequently lost an appeal at FIFA.