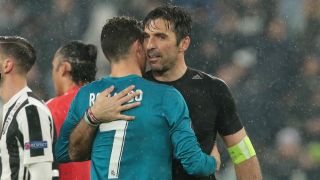 Juventus great Gianluigi Buffon would be unsurprised if Real Madrid star Cristiano Ronaldo signed for the Serie A champions.

Ronaldo, 33, is linked with a stunning €100million switch from Madrid to Juve, with the deal reportedly close to completion.

The Portugal international's arrival would come after Buffon's departure, the former Italy goalkeeper having signed with Paris Saint-Germain.

Buffon, who made more than 500 league appearances for Juve, said Ronaldo joining the club would come as no surprise.

"I wouldn't be surprised to see Ronaldo at Juventus," he told Sky Sport on Monday.

"It would make me happy because it is what the Juventus world needs, to find new idols and adore them."

Buffon confirmed his Juve exit in May, having been tormented by Ronaldo in the Champions League the past two seasons.

Ronaldo scored three times to eliminate Juve in the quarter-finals last season, having netted a double against the Italian side in the 2017 decider.

Buffon said it was those goals, and not Ronaldo potentially joining the club after his departure, that hurt.

"It doesn't bother me. It bothers me the two goals that he scored against me in the final and the ones that he got last season," he said jokingly.

"It would be the best advertising for Italian football. It is confirmation of how much Juventus, with [chairman] Andrea Agnelli and his family, can adapt to the times and even anticipate them."