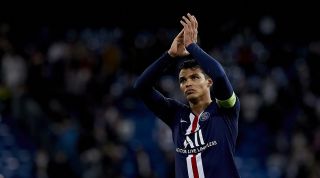 Chelsea are weighing up a move to sign Thiago Silva on a free transfer, according to reports.

The Telegraph write that the Blues are considering making the Brazilian an offer as he gets set to leave PSG.

Silva will play his final game for the French side in Sunday’s Champions League final, when Thomas Tuchel’s men take on Bayern Munich.

He will then turn his attention towards the future, with the centre-back having already been linked with a host of clubs across Europe and back in South America.

Arsenal, Wolves and Everton are among the Premier League teams who have supposedly been keeping tabs on the former Milan stopper.

And Stamford Bridge has now emerged as an alternative destination for Silva, who has made more than 300 appearances for PSG since his arrival in 2012.

Frank Lampard has identified the experienced centre-half as the man to bolster his backline ahead of his second season at the helm.

Chelsea conceded 54 goals in the Premier League goal last term – more than any other top-half finisher and the same amount as Brighton, who came 16th.

The Blues will have to tighten up in defence if they want to improve on their fourth-place finish, but their only signings so far this summer have been in attack.

However, Timo Werner and Hakim Ziyech could soon be joined by Silva, who is prepared to take a pay cut in order to extend his stay in Europe.

“I have already said a lot of times before I wanted to, that I want to finish [my career] here in Europe,” the 35-year-old told RMC earlier this week.

“A decision was taken, now things are calm in my head. It will be in another club, but my heart will stay here [in Paris].”

Chelsea will face Brighton in their first Premier League fixture of the 2020/21 season.