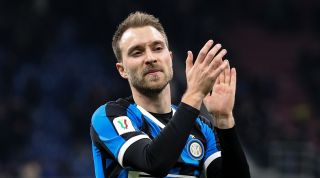 Christian Eriksen has confirmed he held talks with Manchester United before his move to Inter.

The Denmark international left Tottenham for the Italian outfit last week in a deal worth £17m.

United were linked with the playmaker during the January transfer window and last summer.

And while Eriksen admits he did discuss a potential move to Old Trafford with the club, he says he wanted to play in a different league after six-and-a-half years in England.

"[There were links] For a few years but it was never really likely," he told BBC Sport.

"We did speak to them, of course, and we did hear what was possible and what wasn't possible.

“But, in the end, me personally, I wanted a new challenge. To stay in the Premier League would have been an easy solution.

"Of course, staying at Tottenham would also have been a solution but, for me, it just came down to wanting to try a new challenge in a new country. Once Inter came up it really wasn't a difficult choice."

Eriksen says he felt like "the black sheep" during his final few months at Spurs, but he retains great memories from his time at the club.

"The Champions League final [against Liverpool last season] was such a special moment. In the history of Tottenham, it was the first time," he added.

"To be there was so nice and beautiful. But you lose and the next day it is the end of the world. That is how it goes.

"Afterwards it was difficult. People were still sad from the Champions League final when the season started. After you get a few bad results, then you go into a spiral you are not used to and it was difficult to come back up.

"But if you look at the Premier League, there is only one team that is really flying. All the others are trying to find their place, not only Tottenham. Some seasons are like that.

"The history of the last five years is of Tottenham being where they have not been before for a long time. It was not a time to end but, in a way, it just came along which was something we didn't expect and didn't want."

Eriksen added on making the transition from the Premier League to Serie A with Inter: "Historically, it is not that easy to come in January. Everyone is at the same fitness level because they have trained together all season.

"I need to fit in with how they play and learn the different things they do."