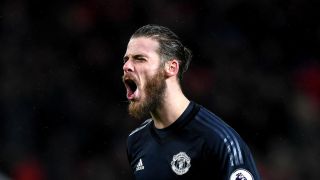 David de Gea is keen to delay talks over a new Manchester United contract until the end of the season.

United manager Jose Mourinho this week called for De Gea to be given a bumper extension to his current deal, which is set to expire in 2019, although it has an option to be increased for a further 12 months.

Long-term Real Madrid target De Gea has developed into one of the world's finest goalkeepers since joining United from Atletico Madrid in 2011.

But despite near-constant speculation linking the 27-year-old with a return to the Spanish capital, De Gea is in no rush to sit down for contract talks.

"I don't think it's the time to start talking about the future, it's not the time to be talking contracts," De Gea told Sky Sports.

"We have lots of games between now and the end of the season and the first thing we need to think about is Burnley this weekend.

"It's all about getting your head down, focusing, working hard, competing in training, keeping fit and picking up points.

"Being part of such a great club like Manchester United fills you with emotion and you gradually realise how much the club means to the fans and the people who work here. They really live for the game, so that does become part of you and you can only appreciate that having spent time here."

Although United are 12 points adrift of runaway Premier League leaders Manchester City, De Gea's 13 clean sheets from 23 appearances is more than any other goalkeeper has recorded in the division this season.

And the Spain international still believes it is possible for Mourinho's men to catch neighbours City, who suffered their first domestic defeat of the season at Liverpool in a 4-3 thriller last week.

"You have to be honest and say it's difficult, but in the Premier League you never know what will happen," De Gea added. "It's a very difficult league to compete in. Obviously it will be tough.

"There is quite a big gap, 12 points is a lot, but we will fight very hard every game to get as many points as we can and then see where we end up at the end of the season. It's about not giving up - and fighting until the end."