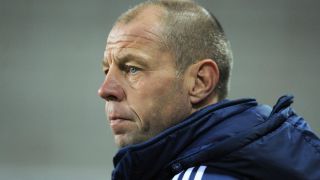 Interim Netherlands boss Fred Grim was heartened by his players' battling qualities in the 2-1 friendly victory over Morocco in Agadir.

Spartak Moscow attacker Quincy Promes was the star man for the Dutch, revelling in the number 10 role and opening the scoring in an impressive first-half display.

The visitors had fallen away by the time Promes set up Vincent Janssen for the 68th-minute second and their task soon became more complicated when Ajax youngster Matthijs de Ligt was sent off for bringing down Walid Azaro.

Mbark Boussoufa dispatched the resulting free-kick but Netherlands held out, earning praise from Grim, who will make way for Dick Advocaat after Sunday's friendly against Ivory Coast.

"The win is very important, I am very happy," Grim told reporters, even if he was less impressed by Morocco's conduct during the match.

"At times I have seen good football but things happened that did not belong on a football pitch.

"It can cause a reaction but the players behaved professionally and that's very good for a young team.

"After the break we were out of position too much but we worked very hard with 10 men. This will give us confidence for the next two games."

Advocaat will assess the players used by Grim before naming a final squad for the June 9 World Cup qualifier against Luxembourg and Promes did himself no harm in terms of pushing for a key role in the new regime.

"It was a tough game. They obviously play with pride against the Netherlands, so that was to be expected," said Promes, who enjoyed the role handed to him by the coach.