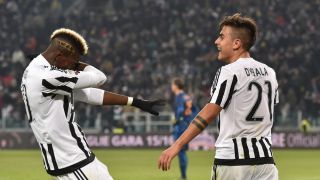 France international Pogba arrived at United from Juve for an initial €105million in 2016 but has struggled for consistency in the Premier League.

The 25-year-old was dropped by Jose Mourinho in 2017-18 as reports of a strained relationship between the pair surfaced, leading to links with a return to the Serie A champions.

Dybala inherited the Bianconeri's number 10 jersey from Pogba and is keen to link up with his former team-mate again.

"Hearing that he is maybe coming back, I'm very happy, even more with the relationship I have with him. Now we could stop making video calls and we would go back to training together," the Argentina star told TyC Sports.

"I felt very good on the pitch with him. There was a lot of feeling between us, and we also get on very well off the field.

"We always created new greetings, new ways to celebrate a goal, like when we touched our fingers after watching Dragon Ball Z."

Dybala could take on Pogba at the World Cup in Russia, as Argentina and France are tipped as contenders to go all the way in the tournament.