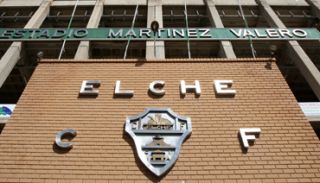 Alicante-based Elche, who play in green and white, last featured in La Liga in the 1988/89 season and spent seven terms in the third tier of Spanish football in the 1990s.

Their golden period came in the 1960s under coach Heriberto Herrera and they finished fifth in the first division in 1963/64 behind Real Madrid, Barcelona, Real Betis and Real Zaragoza.

Saturday's draw for third-placed Alcorcon leaves them 11 points behind leaders Elche with three games left, meaning Elche, who play at fifth-placed Almeria on Sunday, are assured of at least one of the two automatic promotion spots.

Elche have 77 points, 10 ahead of second-placed Girona, who were playing at fourth-placed Villarreal later on Saturday.

If Girona fail to win Elche will be certain of first place as they have a superior head-to-head record against the Catalan club.