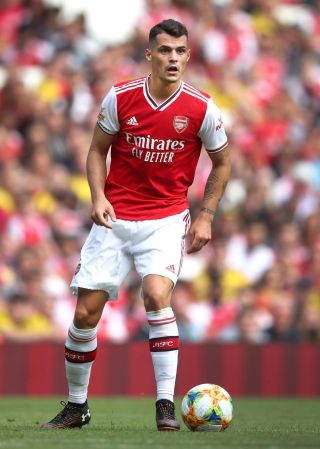 Unai Emery insists he will talk to Granit Xhaka before deciding whether to strip him of the Arsenal captaincy after the midfielder swore at his own fans.

The 27-year-old told Gunners’ supporters to “f*** off” as they reacted to his substitution during Sunday’s 2-2 Premier League draw at home to Crystal Palace.

The Gunners had flown out of the blocks and were two goals ahead inside 10 minutes as defenders Sokratis Papastathopoulos and David Luiz struck 106 seconds apart.

But the talking point came after 61 minutes as Xhaka, a decisive figure among Arsenal supporters was substituted for Bukayo Saka.

Xhaka’s withdrawal was initially greeted by large cheers, which soon turned to jeers as he took his time to leave the pitch despite the score being level.

He reacted by waving his arms, cupping his ears and mouthing expletives as he pushed away a handshake from Emery, took off his shirt and headed straight down the tunnel.

Xhaka’s antics will now dominate the coming days and – as he admitted the Switzerland international acted incorrectly – Emery said he would hold talks before deciding whether to appoint a new skipper.

How the #PL looks after an eventful weekend pic.twitter.com/WbOHhMgy4x— Premier League (@premierleague) October 27, 2019

“Now we need to stay calm and speak with him, to speak inside about that reaction. His reaction was wrong in that moment.

“We are here because we have supporters. We are the workers inside, but we play for them. We need to have a lot of respect from them, through applause and criticism.

Despite the incident, Arsenal will still feel aggrieved not to have taken all three points as Sokratis saw a late second goal chalked off by the VAR for a foul by Calum Chambers.

While Emery was unhappy with the call, Eagles boss Roy Hodgson praised referee Martin Atkinson and the use of the VAR to have earlier awarded the visitors their penalty.

“I’m pretty certain Martin is pretty comfortable with the VAR decision,” he said.

“His spur-of-the-moment decision turned out to be the wrong one and I’m certain he’s man enough to accept that and be glad that it got overturned and the right decision was made.

“Their second goal was a clear push on James McArthur so we could have been sitting here having lost 2-0 saying that goal should have been disallowed.

“I could have been complaining bitterly that the referee was relatively kind to Arsenal for allowing the rugby tackle and allowing the player to stay on the field.”