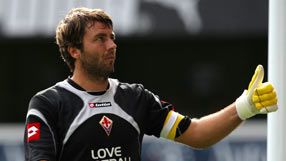 The Florence side have a ready replacement for the Frenchman in Poland's Artur Boruc but the injury is another blow amid a troubled start to the campaign for Sinisa Mihajlovic's men, who lie 15th.

Forward Stevan Jovetic was ruled out for six months before the start of the season with the same knee injury while Adrian Mutu has only just returned to action after a nine-months drugs ban but is being probed by police over an alleged assault.